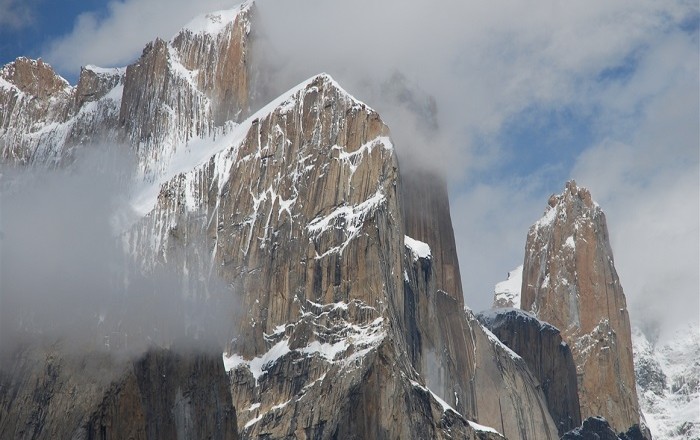 There are some impressive and extremely difficult rock towers around the world, competing in being the hardest to climb. One of the more famous and possibly the group of peaks that would get the most votes for being the toughest is the Trango Tower Peaks. 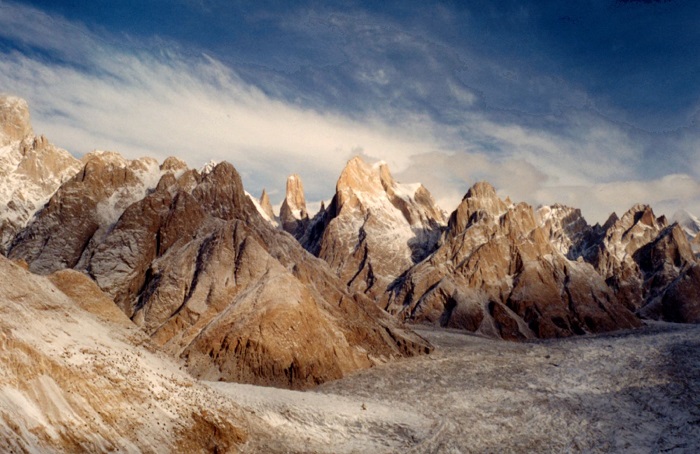 The Towers are situated in Gilgit-Baltistan, an autonomous territory in the North of Pakistan and offer some of the largest cliffs and most challenging rock climbing in the world. Every year a number of expeditions from all corners of the globe visit Karakoram to climb the challenging granite. They are located north of Baltoro Glacier, and are part of the Baltoro Muztagh, a sub-range of the Karakoram range. 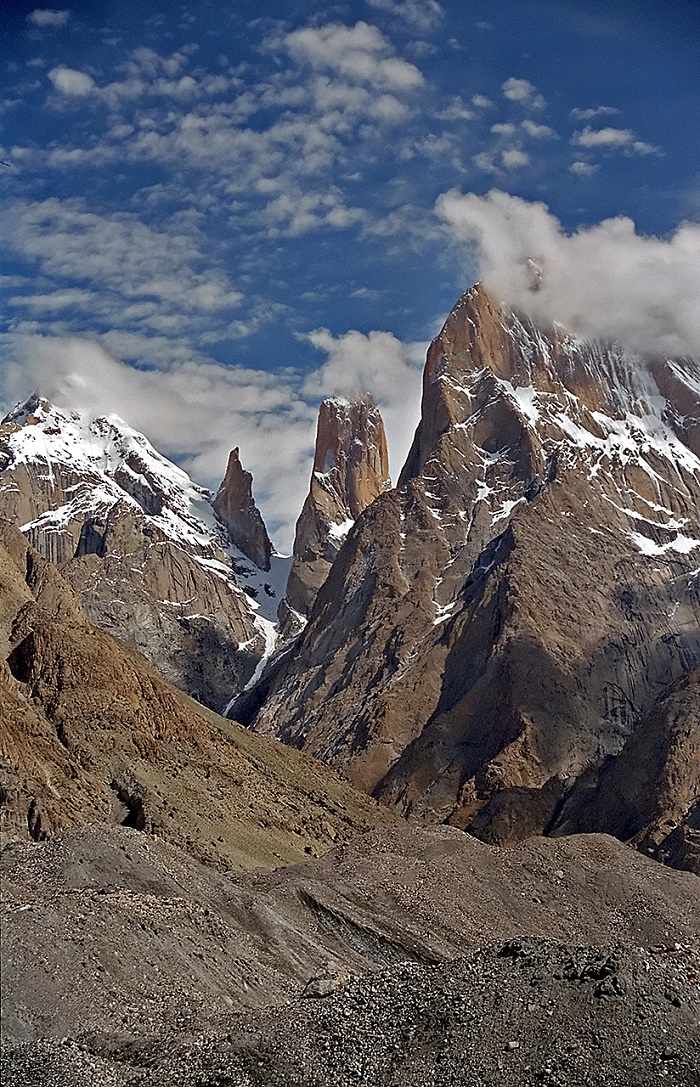 The group is reasonable easy to access as it is located much closer to civilization than many other popular peaks in Pakistan. The peaks have some of the highest vertical faces on the planet and were for a long time some of the most coveted mountaineering challenges. It was not until 1975 the area opened for climbing and the race for the hard-to-reach summits began. 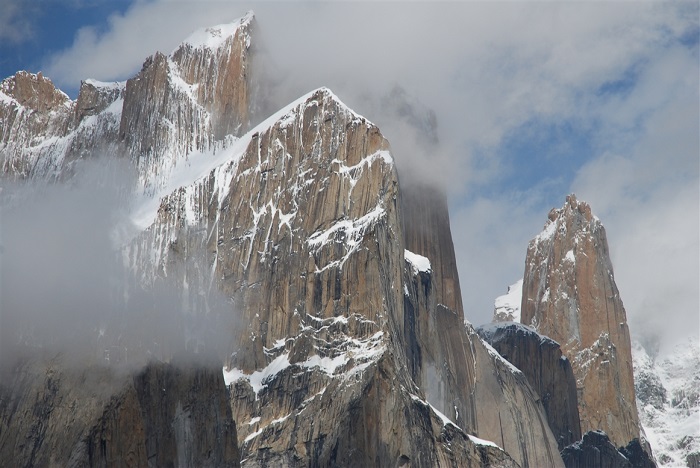 All of the Trango Towers lie on a ridge, trending northwest-southeast, between the Trango Glacier on the west and the Dunge Glacier on the east. Great Trango itself is a large massif, with four identifiable summits: Main (6,286 meters), South or Southwest (circa 6,250 meters), East (6,231 meters), and West (6,223 meters). It is a complex combination of steep snow/ice gullies, steeper rock faces, and vertical to overhanging head walls, topped by a snowy ridge system. 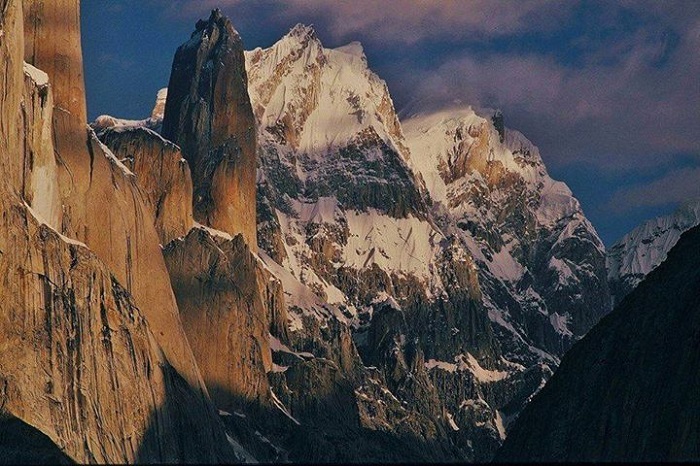 Just northwest of Great Trango is the Trango Tower (6,239 meters), often called “Nameless Tower”. This is a very large, pointed, rather symmetrical spire which juts 1000 meters out of the ridge line. North of Trango Tower is a smaller rock spire known as “Trango Monk.” To the north of this feature, the ridge becomes less rocky and loses the large granite walls that distinguish the Trango Towers group and make them so attractive to climbers; however the summits do get higher. 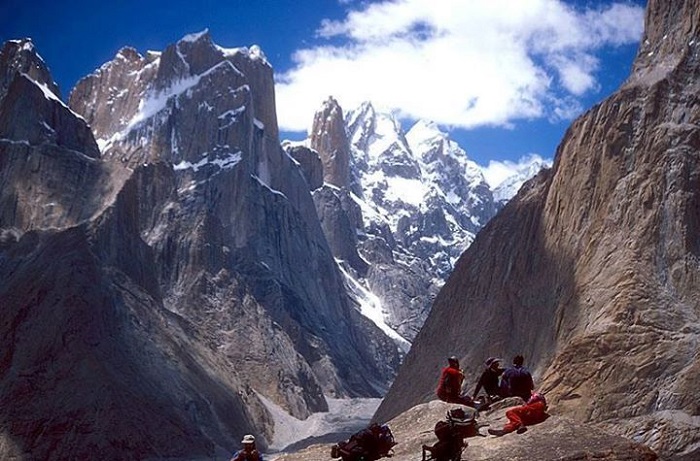 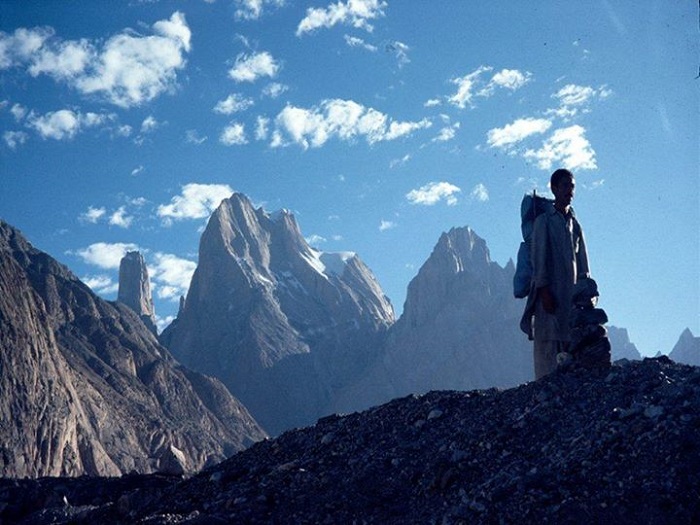 Further, to the south is Trango Castle (5,753 meters), the last large peak along the ridge before the Baltoro Glacier. Overall, the Trango Towers group has seen some of the most difficult and significant climbs ever accomplished, due to the combination of altitude, total height of the routes, and the steepness of the rock. All of the routes are highly technical climbs. 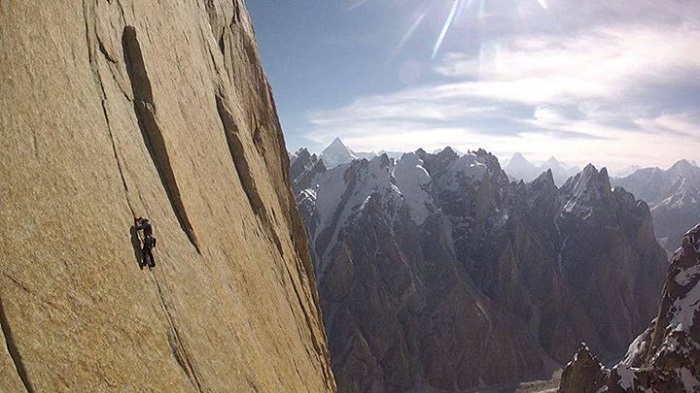 Trango towers have only been climbed once by Pakistani rock climbers in history. Imran Junaidi and Usman Tariq successfully reached to the summit of Trango Tower in July 2014 and opened a new route with difficulty 5.10d, A0. They are also the first locals to attempt Trango Tower, in September 2013, but were forced by heavy snowfall to descend from camp 2. Two days later, however, the team climbed a virgin line at Trango Braak, reporting difficulty of 5.10, A1. 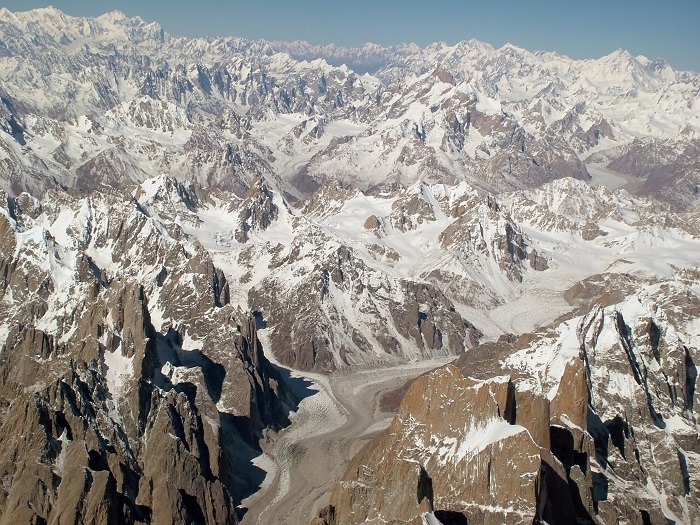