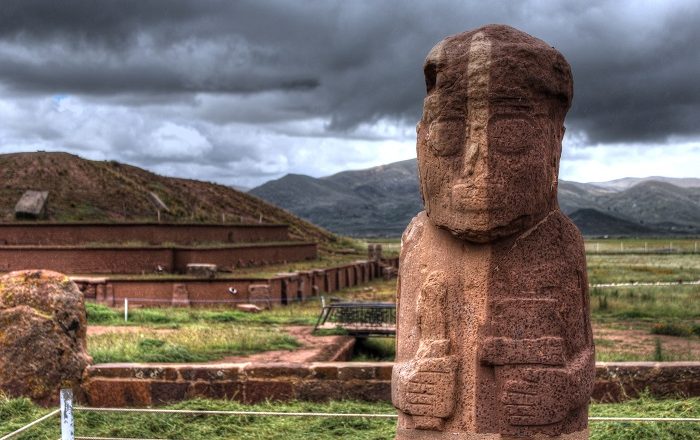 Tiwanaku is an archaeological site which is considered to be among the largest ones, dating back from the Pre-Columbian era, and it is located in the western part of the Plurinational State of Bolivia.

Being in the vicinity of Lake Titicaca, this former settlement was the place where the Tiwanaku Empire grew for approximately 500 years from a small one that was focused on mainly agricultural activities to a thriving ritual and administrative capital of a major political state.

As a matter in fact, the precise location between Lake Titicaca and the dry highlands made for the settlement to be a great place for agricultural farming, making it a desirable base for the Tiwanaku people. The surface of the urban area covers some 4 square km (2 square mi), and some of the archaeologists are suggesting that the peak was some time around the year 800 when the population was between 10,000 and 20,000 inhabitants. 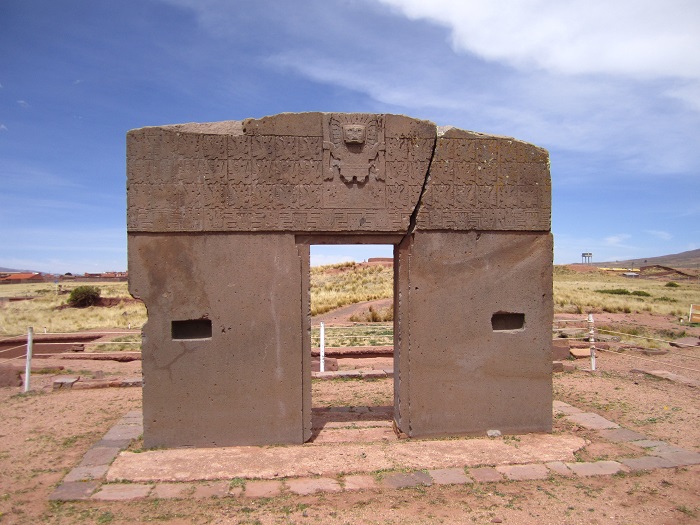 Today what remains from this pre-Hispanic center is a proof that the monumental remains were part of a cultural and political center that had quite the big significance in the region. 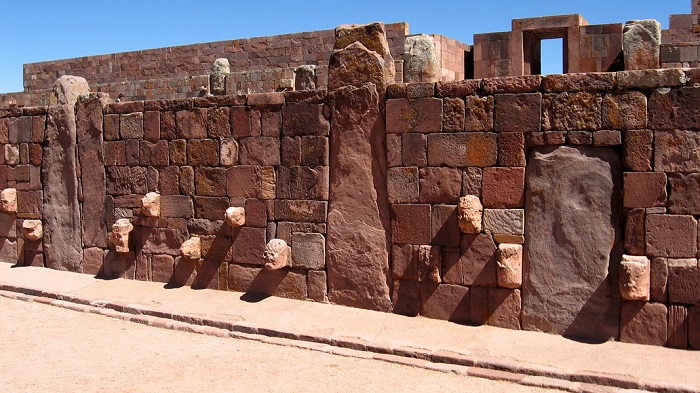 Distinctive from the other empires in the Americas from that period, the settlement was organized spatially with orientation from the center towards the cardinal points, while throughout can be seen some impressive ashlars stones that were carved accurately and equipped with a complex system of underground drainage which was controlling the flow of rain waters. 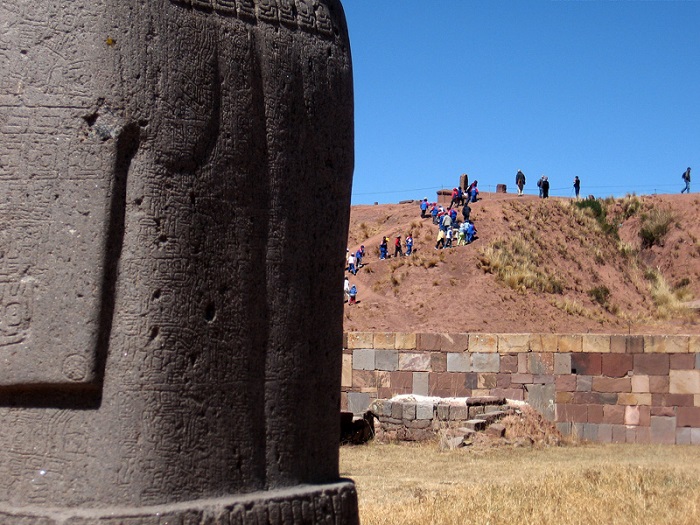 Unfortunately, the demise of this glorious place is believed to began some time around the year 950 when a substantial shift in the climate changed the entire region, which also brought a significant drop in precipitation causing for the agricultural production to dry up. 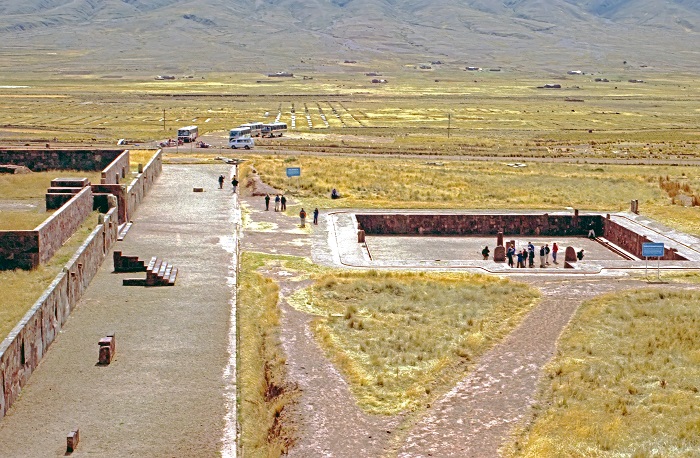 The first written record of Tiwanaku was noted in 1549 by the Spanish conquistador Pedro Cieza de León, who were told that the ruins were either raised by giants or perhaps from an agnostic population whom Deity got converted into stone since they refused to house the messenger. Since then, Tiwanaku continues to represent an intriguing enigma that is constantly puzzling archaeologists who are trying to solve it. 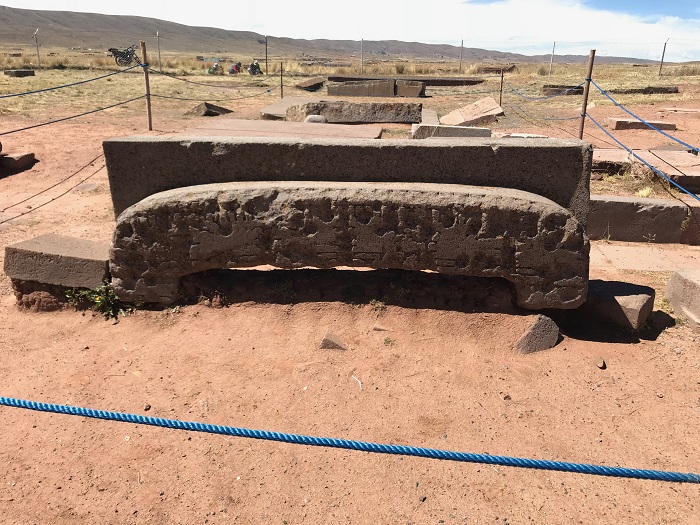 From the uncovered structures which were excavated by researchers there are several structures which are visited by the general public. The Akapana is a pyramidal structure which is some 17 meters (56 feet) tall, and unfortunately almost destroyed by looters that were slowly looting and destroying this interesting structure. 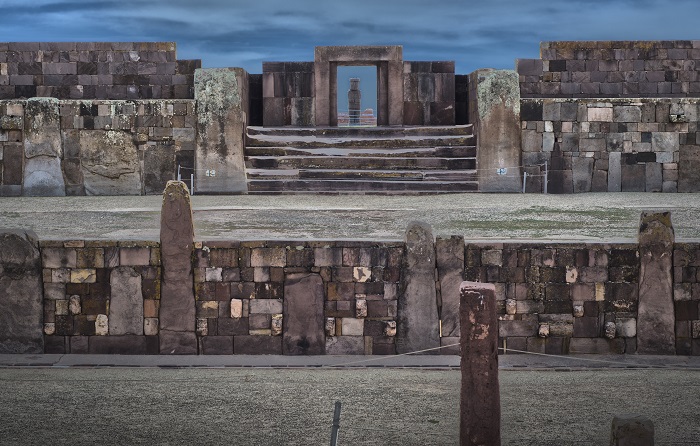 Originally with seven superimposed platforms with stone retaining walls, only the lowest of these and part of one of the intermediate walls survive intact nowadays. The Akapana East is considered to be the boundary between the ceremonial center and the urban area, constructed from a thick, prepared floor of sand and clay, which supported a group of buildings. 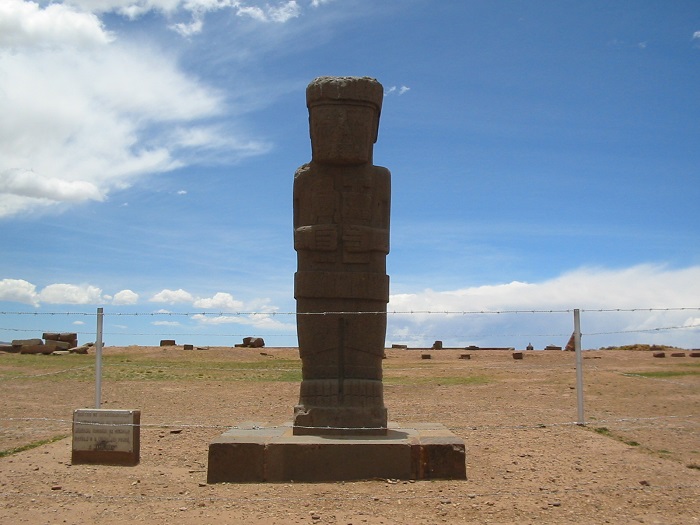 The Pumapunku is a stepped rectangular platform which is faced with megalithic blocks, and it is 167 meters (548 feet) wide and 117 meters (384 feet) broad. The Kalasasaya represents a large courtyard that is more than 91 meters (300 feet) long, and it is interestingly outlined by a high gateway. 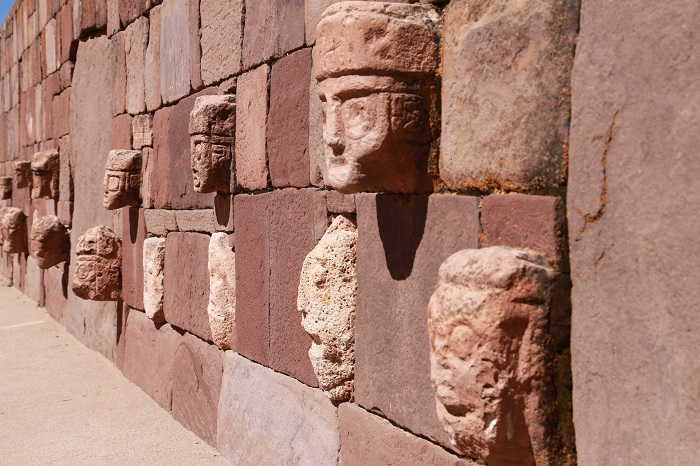 The researchers are still puzzled with Kalasasaya, because since the late 20 century they have theorized that this was not the original location, and that it was most likely moved. Furthermore, the Semi-Subterranean Temple is a square sunken courtyard that is unique for its north–south rather than east–west axis, which walls are covered with tenon heads of many different styles which imply that the structure was reused for different purposes over time. 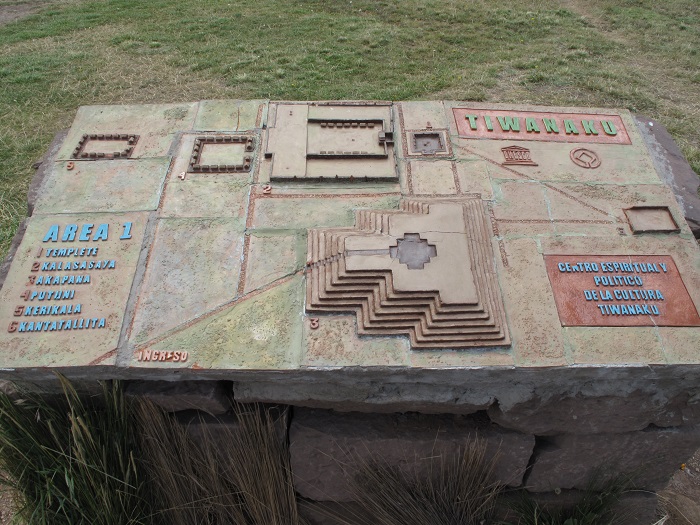 Made up from 48 pillars in red sandstone, this small semi-subterranean temple is considered to be the place of a practice where the Tiwanaku people were exposing the severed heads of defeated enemies. Still, there are quite many other impressive gateways, some of which are having a monumental scale and show iconography of the Staff God. 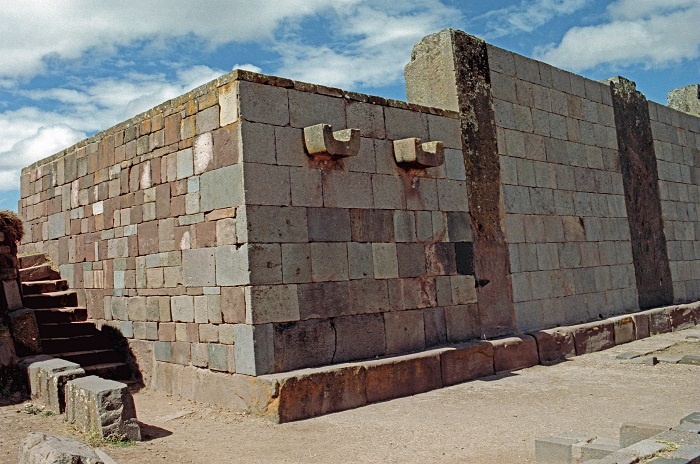 Designated as a UNESCO World Heritage Site since 2000, the ruins of Tiwanaku are still being excavated with some restoration work carried out, with hope that the archaeologists will find some more precise sources which will point to the glorious history of the Tiwanaku Empire that ruled the region. In that way more people will know about the mysterious history that Tiwanaku still holds back and does not want to reveal. 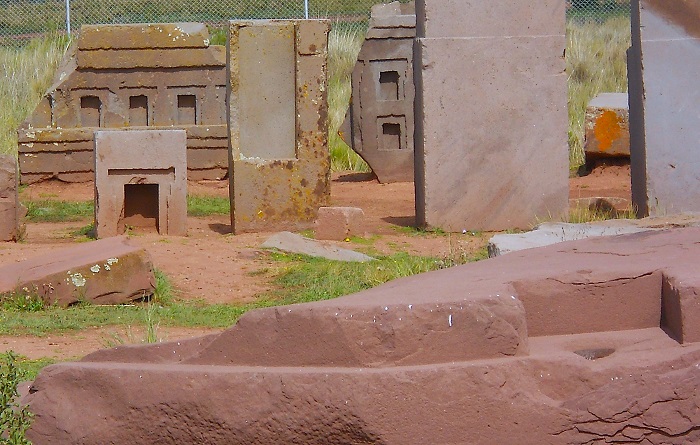 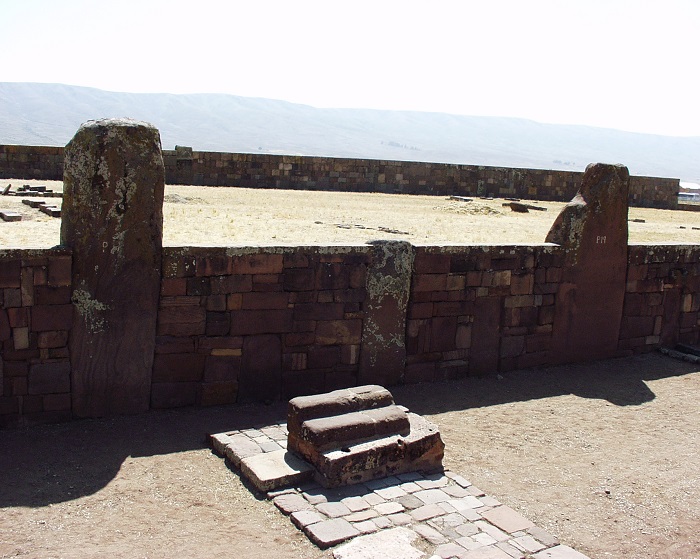 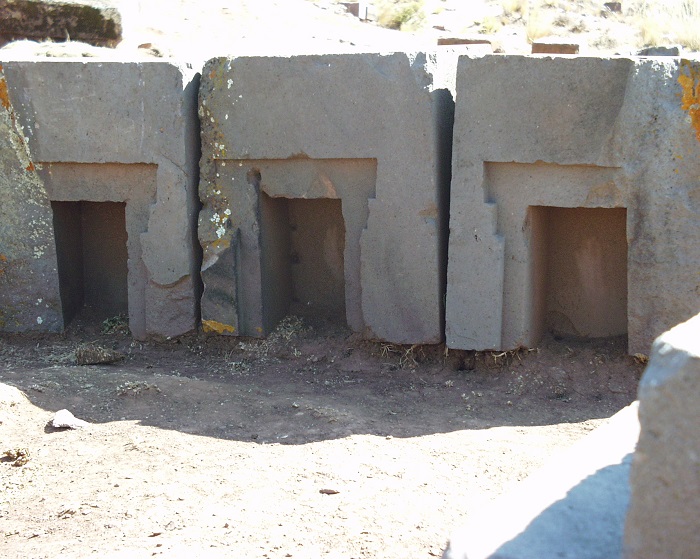 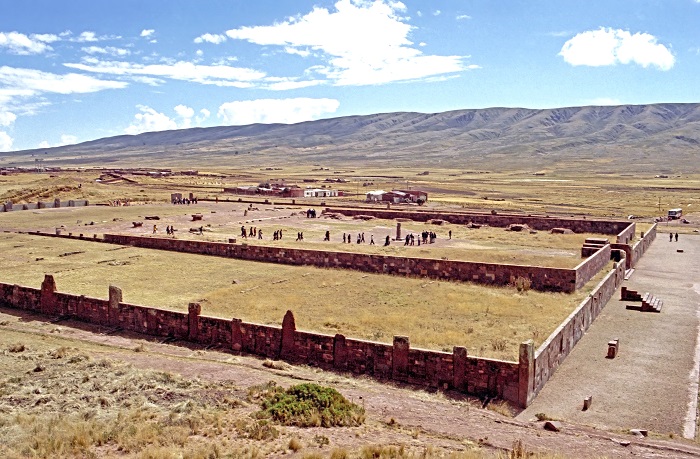 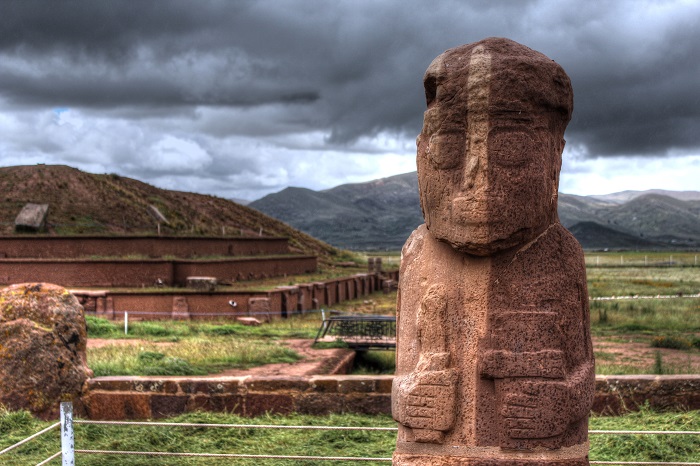