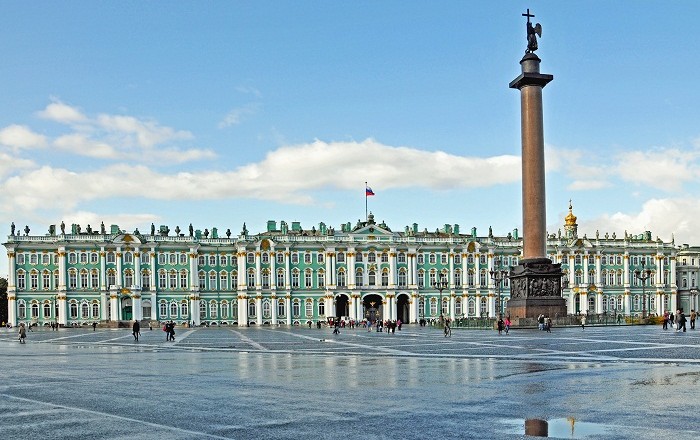 The State Hermitage Museum is a museum of art and culture of great importance located in the second largest city in the Russian Federation. As one of the oldest and largest museums in the world, founded by Catherine the Great in 1764, it managed to stay exactly the same as it was first built, including the reconstruction done at the end of the 18th century. 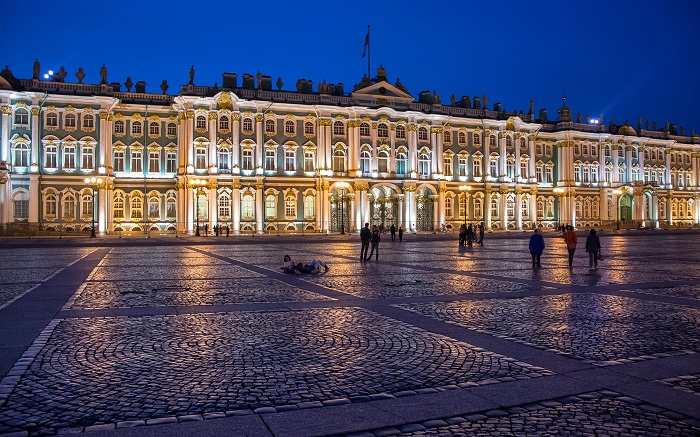 Its collection comprise over three million items, including the largest collection of paintings in the world. As it is one of the main exhibition centers in the country, it has also several exhibitions abroad. Nonetheless, to house all those amazing big collections of paintings, numismatics etc, the Museum occupies six different historic buildings. 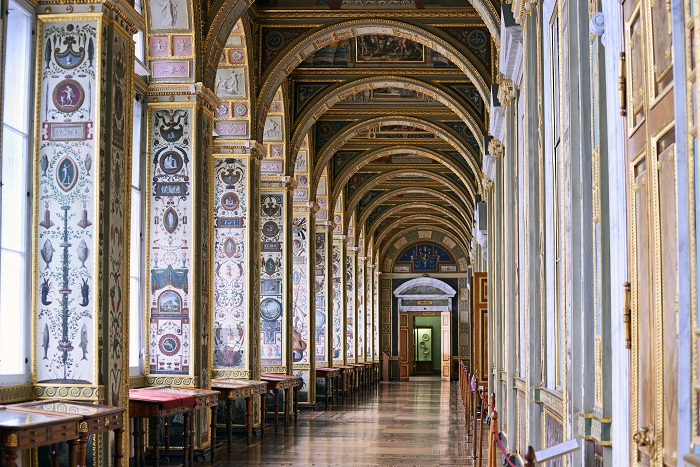 The Winter Palace is an elegant, monumental palace, looking like a striking monument of the Baroque style in mid-18th-century Russian art. The palace is a brilliant example of the synthesis of architecture and decorative plastic art. All the facades are embellished by a two-tier colonnade. 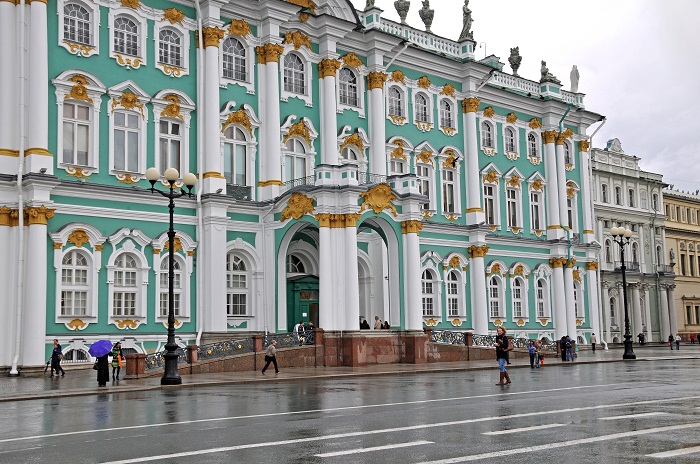 Forming a complex rhythm of verticals, the columns soar upwards, and this motion embraces the numerous statues and vases on the roof. The Small Hermitage is a building with two floors which was erected next to the Winter Palace in 1764-1766 by the architect Yuri Velten commissioned by Empress Catherine II. 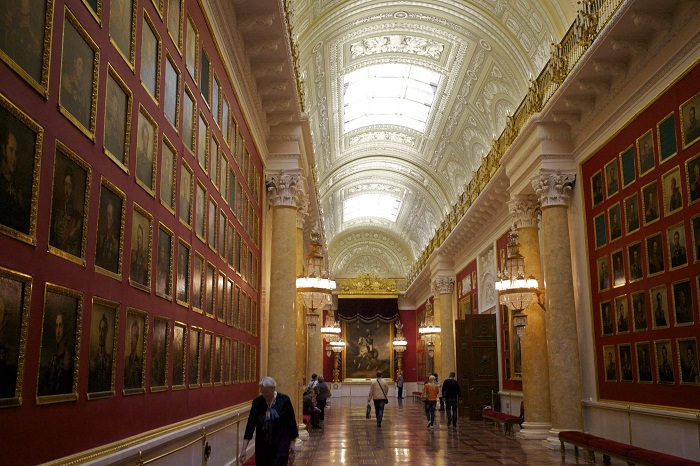 It successfully combined late Baroque and early Neoclassicist elements. The rhythm of the Corinthian colonnade on the second level of the pavilion emphasizes the architectural unity of two buildings quite different stylistically. The New Hermitage was the first building in Russia constructed specially to house the museum collections. 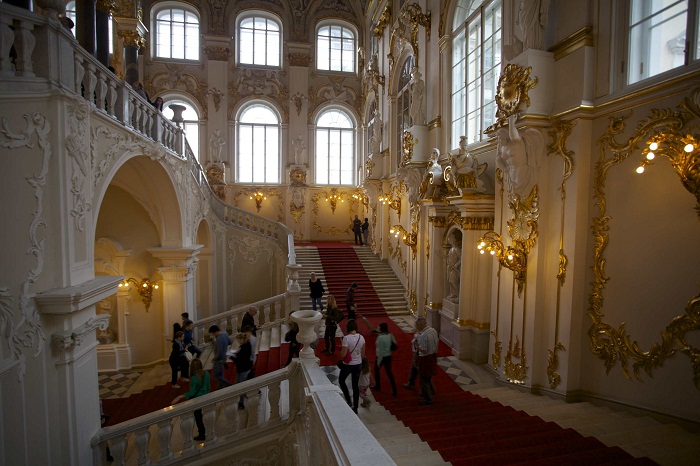 Emperor Nicholas I invited German architect Leo von Klenze, whose works largely formed the image of the museum architecture in Europe, to come to Russia and build the Imperial Hermitage. Architects Nikolay Yefimov and Vasily Stasov, commissioned to execute Klenze’s project, made some essential changes to it in order to fit the new construction to the existing architectural surroundings. 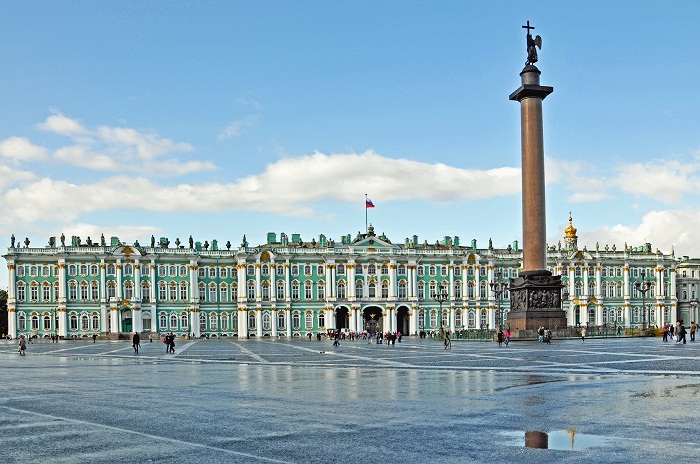 The entrance to the museum is accentuated with a magnificent portico supported by the Atlantes figures cut from grey granite in the workshop of Alexander Terebenev. The building is also decorated with statues and bas-reliefs depicting famous artists, architects and sculptors of the past. 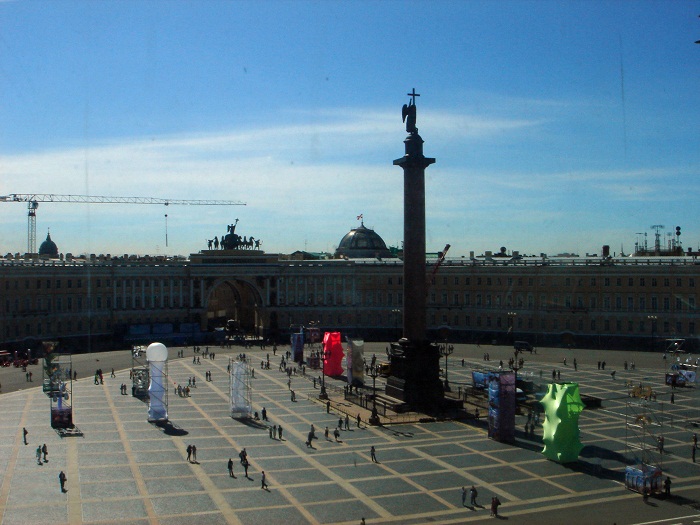 Classical, Renaissance and Baroque ornaments enliven the massive surfaces of the building’s facades. The Hermitage Theatre, designed by the architect Giacomo Quarenghi who was commissioned in 1783 by the Empress Catherine II, is a well balanced harmonic structure which makes it an outstanding example of the late 18th century Russian Neoclassicism. 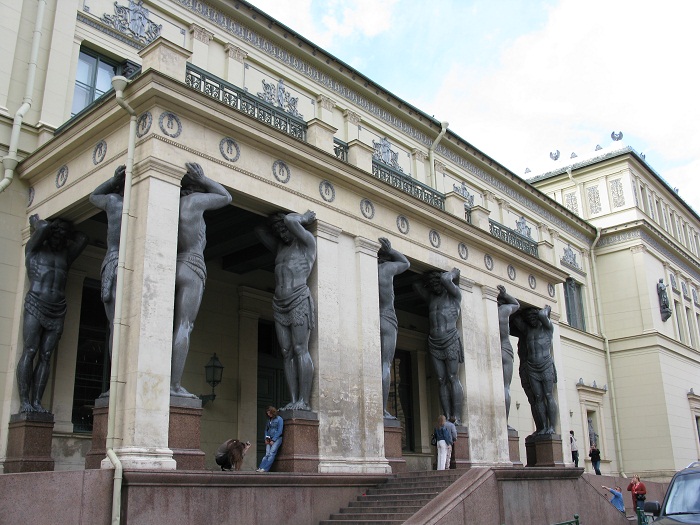 Rustic windows of the ground floor are decorated with key-stones with lion’s masks, one of Quarenghi’s favourite decorative element. The colonnade of the second level of the facade is flanked with the risalits with the statues of ancient Greek playwrights and poets placed in the exedras. 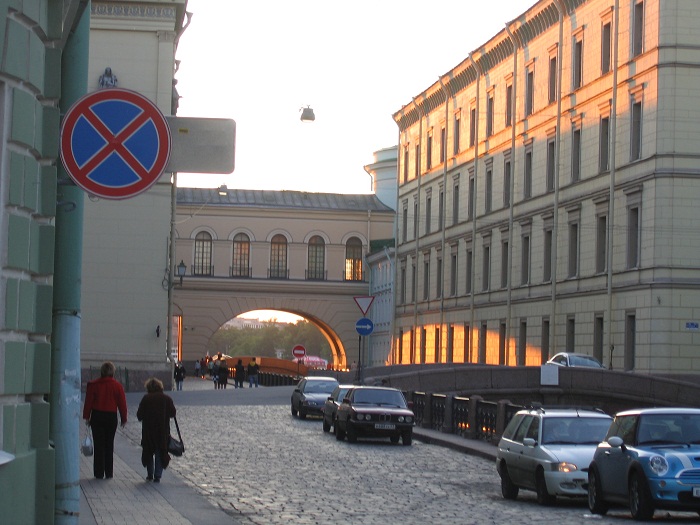 The Great (Old) Hermitage is a new building next to the Small Hermitage which was constructed by the order of Empress Catherine II on the Neva River embankment. Being bigger than the Small Hermitage, it was named the Great Hermitage and was supposed to house the palace collections and the library. 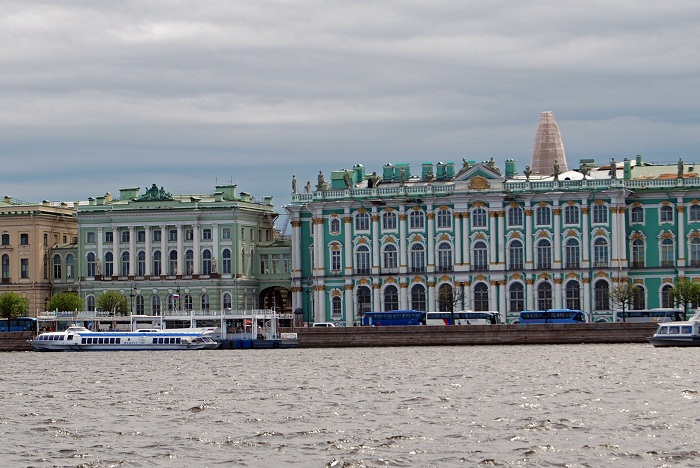 Yuri Velten, the architect, managed to fit the new building into the existing palace complex. The austerity and simplicity of the Great Hermitage followed the canons of the 18th century Classicism. The building has no elements indicating the order such as columns or pilasters, but its structure is wholly determined by the proportions of the classic order. 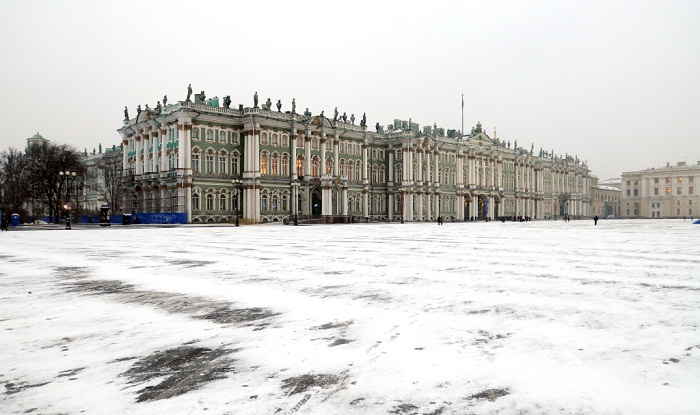 The lower part of the building, massive and rustic, is balanced by the lighter upper part. The decorative scheme of the facade is based on the rhythmical combination of horizontal divisions and vertical window apertures. The General Staff Building is one of the most famous architectural monuments in Saint Petersburg which was designed by the architect K. I. Rossi and was built between 1820 and 1830. 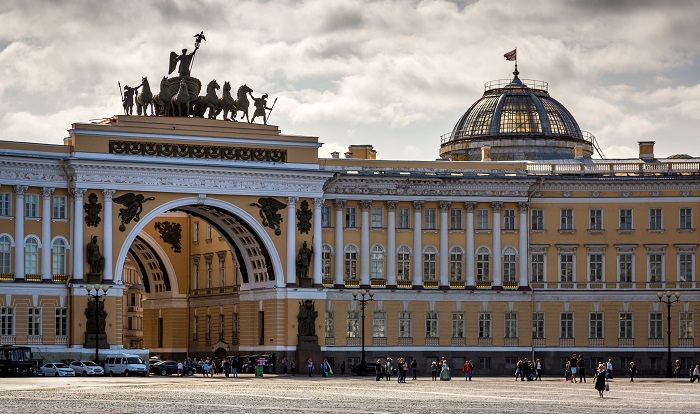 The project revolved around the architect’s idea to unite two separate buildings with a triumphal arch, a monument to Russia’s victory in the war of 1812. This majestic arch is a symbol of Russia’s glory and military triumph, and it forms a symmetrical axe with the central part of the Winter Palace. 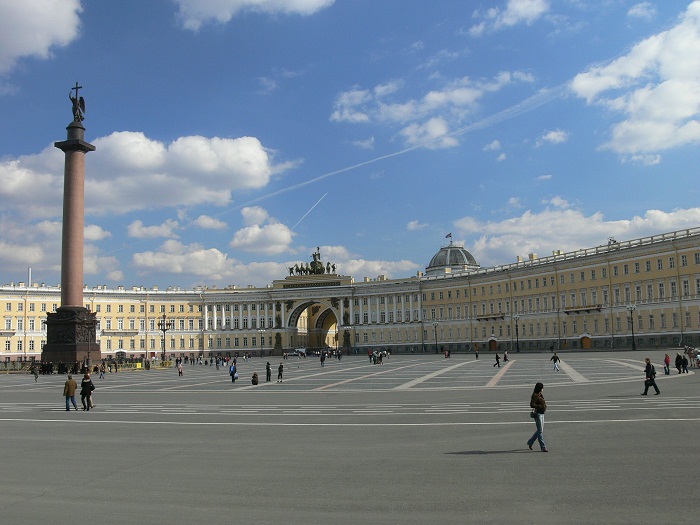 The appearance of the General Staff Building possesses a certain strictness and laconicism. The lower level is interpreted as a rustic basement, while the walls of the upper two floors are smooth. Modest cornices and architraves surround the windows of the third floor (the Parade floor). 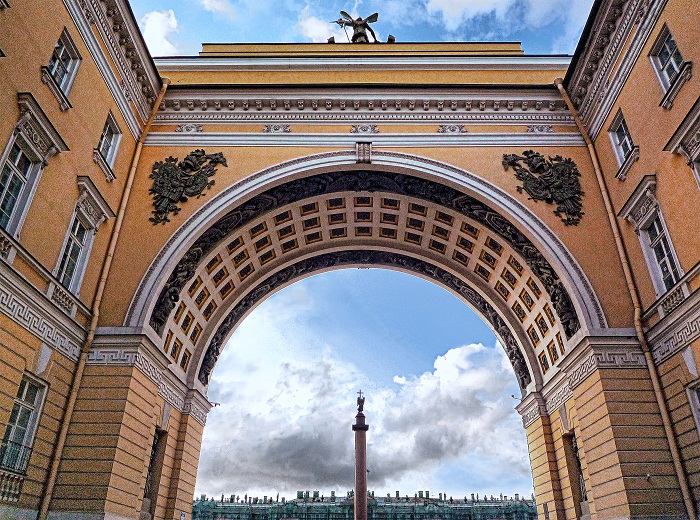 The smooth walls clearly emphasize the raised frieze, and three Corinthian porticos break up the 580m length of the building. The Building of Menshikov Palace is an outstanding example of Petrine Baroque architecture, with characteristic symmetry and simplicity of dimensions, high gabled roofs, two-toned facades and small glass windows. 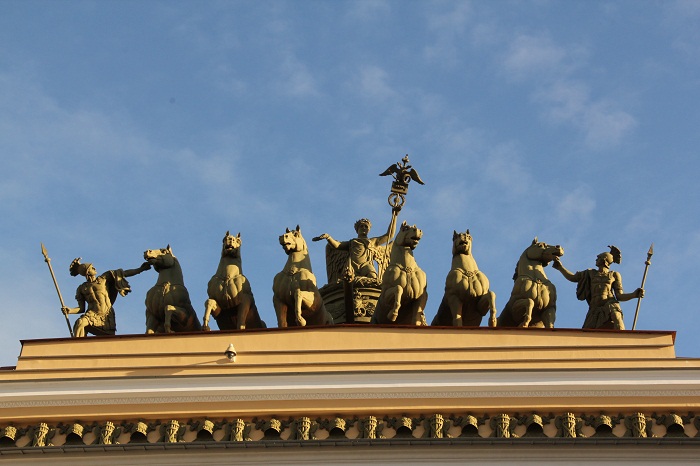 The exterior walls are decorated with pillars and on the top of the risalits of the central building there are gables with enormous regal crowns. The grand entrance takes the form of a stone portal, accentuated by a portico above which a balcony is set. So many royal looking architectural masterpiece buildings, that are state of the art, from one glorious past of a nation.