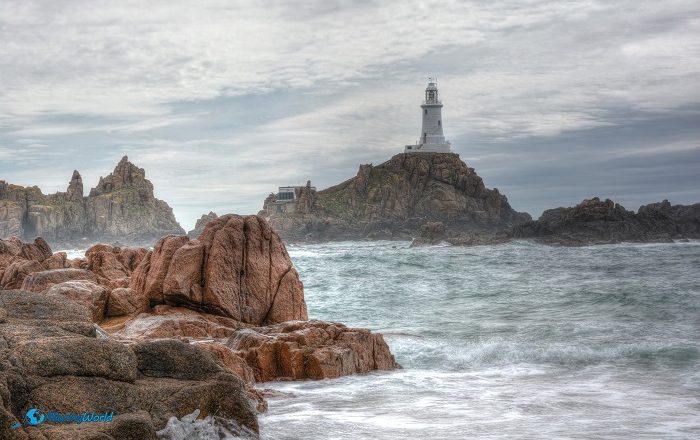 La Corbière Lighthouse is a historic structure that is one of the greatest monuments, and it is located to the extreme southwestern point in the small self-governing dependency, the Bailiwick of Jersey. 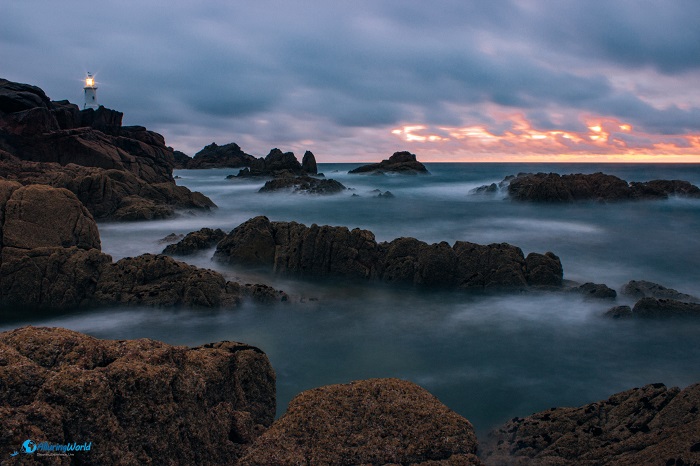 Located more precisely in the tip of the southwestern part of the island, the lighthouse is located on a tidal island, connected to the main island via causeway, which goes above the water during low tides, and the lighthouse itself becomes a separate island during high tide. Being one of the most famous structures of Jersey, the striking lighthouse is drawing plenty of visitors, as it is flanked by rocks and it features one of the most spectacular sunset views that can be seen around the western part of the European continent.

The name most likely comes from the French language that means “the place of the ravens”, although Victor Hugo described it as “the herdsman of the waves”, and it was first recorded with that name in 1309. The design for this magnificent structure was done by Sir John Coode, and the construction work was completed in November 1873, where on 24 April 1874 the first beam of light showed the right way to the sailors. 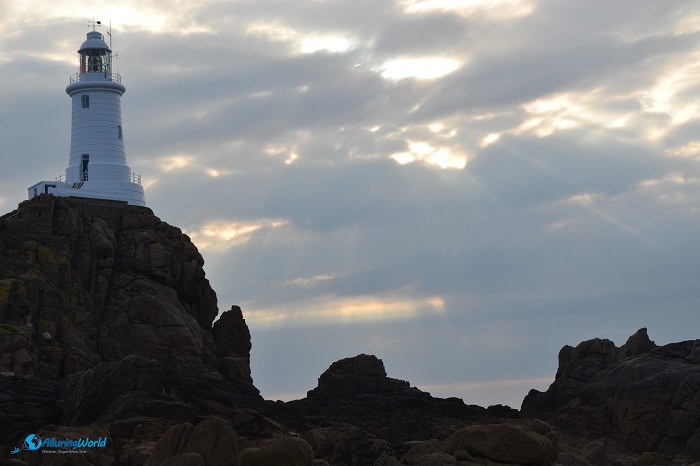 La Corbière Lighthouse is 19 meters (62 feet) in height, but the lamp itself stands 36 meters (119 feet) high when measured during high tides during spring time, and it can be seen some 18 nautical miles (33 km). One of the more interesting facts is that this lighthouse is the first one ever on the British Isles, and according to other people first one in the world, that was built of concrete. 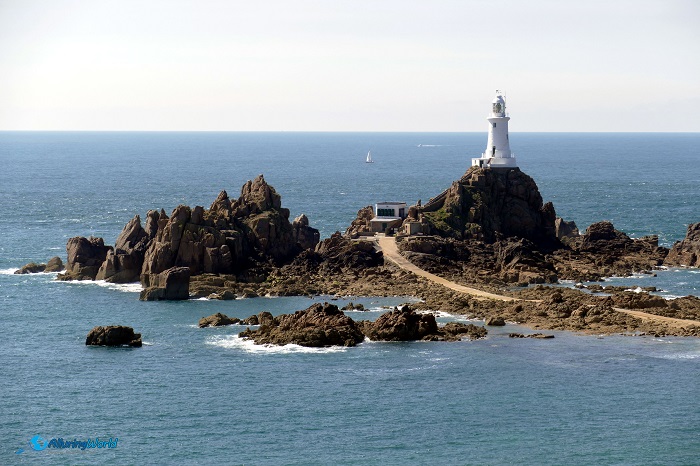 When there is a high tide, an alarm is sounding in order to warn visitors who are on the causeway, simply because in the past sadly there were casualties who were unwary or unlucky and got caught by the strong waves. 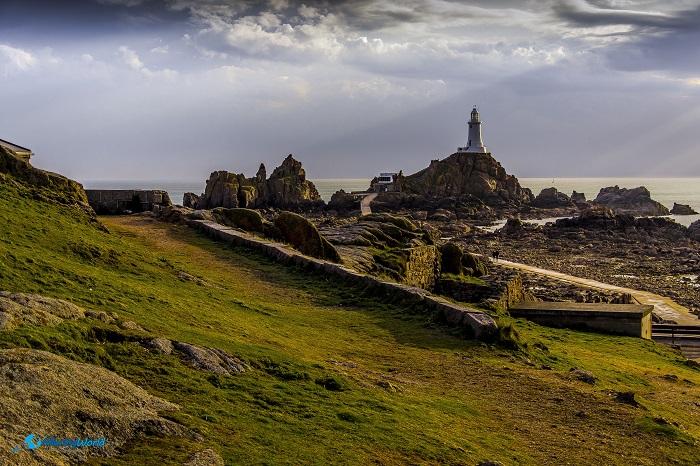 In addition, there is also a plaque adjacent to the causeway that commemorates Peter Edwin Larbalestier who was an assistant to the keeper of the lighthouse, and drowned on 28 May 1946 while trying to rescue a visitor who was cut off by the incoming tide and strong waves. 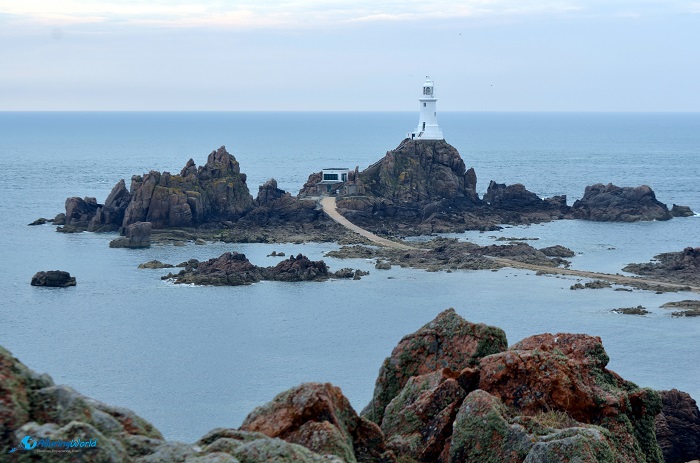 As mentioned previously, due to the impressive panoramic views during sunsets, this is certainly one of the most photographed places in Jersey and the Channel Islands, and a must-see spot for everyone coming to the small island. 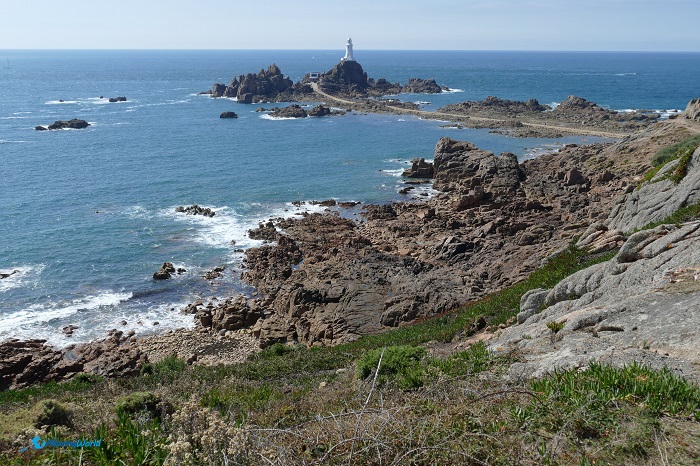 In conclusion, a historic masterpiece from the largest of the Channel Islands, a landmark that holds a longstanding history behind which will captivate and give you the willies especially during sunsets and high tides when La Corbière Lighthouse is at its most imposing pose. 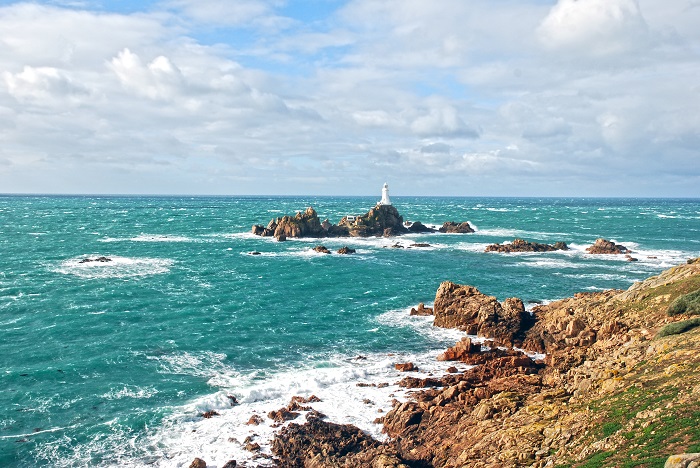