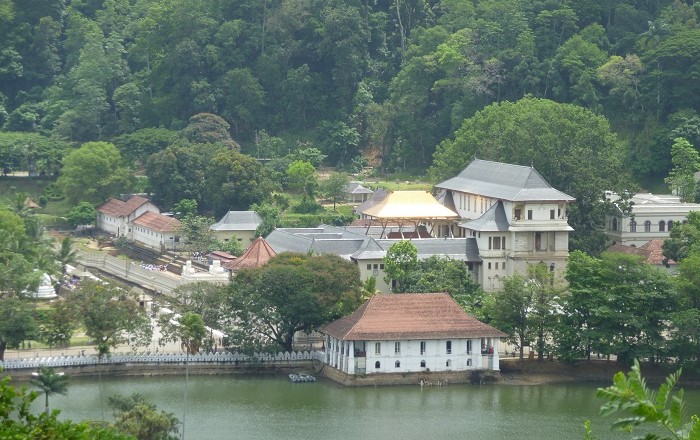 The Temple of the Tooth, also known as Sri Dalada Maligawa, is a Buddhist temple located in the royal palace complex of the former Kingdom of Kandy, within the city of Kandy in the Democratic Socialist Republic of Sri Lanka. 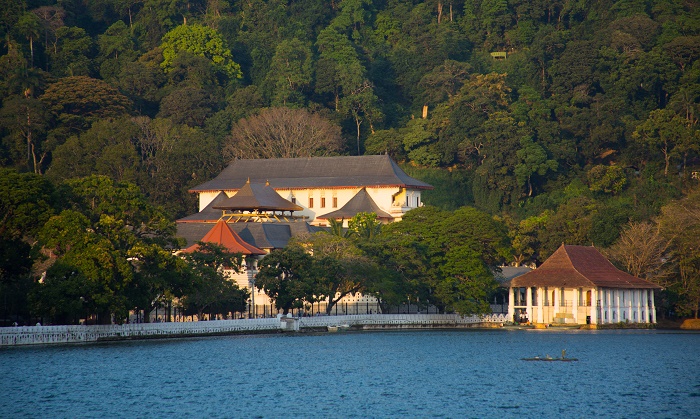 The great importance of this temple comes from the relic of the tooth of the Buddha which is believed that whoever holds it, holds the governance of the country, thus giving it too a great political importance. According to legend, the tooth was taken from the Buddha as he lay on his funeral pyre and then smuggled to Sri Lanka in 313. 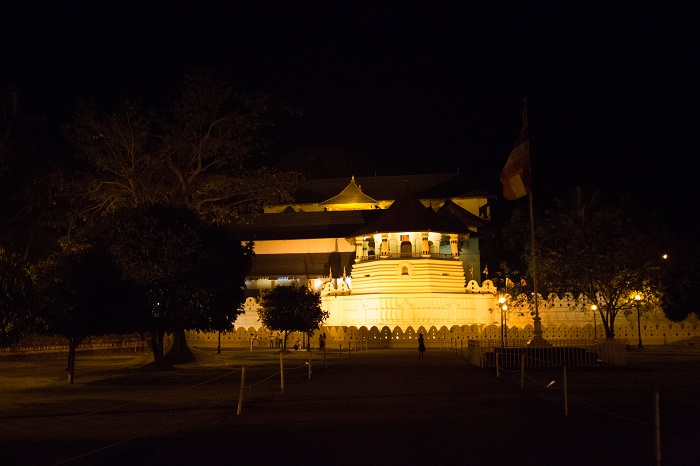 However, it was hidden in the hair of Princess Hemamali who fled the Hindu armies besieging her father’s kingdom in India, and instantly became an object of great reverence making it enshrined in a series of nested jeweled reliquaries. The responsibility of the relic was to the monarch, thus over the years the custodianship of relic became to symbolize the right to rule. 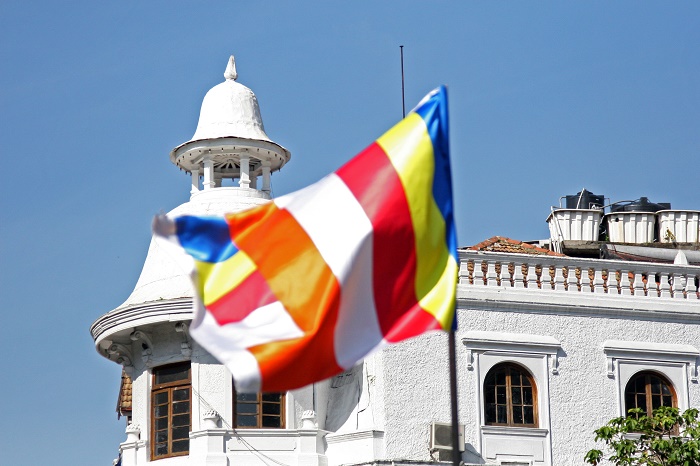 That is why there are the tooth relic temples which are built so close to the royal residences, as it was during the times of the Anuradhapura Kingdom, Kingdom of Polonnaruwa, and Kingdom of Dambadeniya. Still, the tooth was brought out for every special occasion that occurred in the country, and it was paraded on the backs of elephants, which are actually very sacred to the Buddha.

During the era of the Kingdom of Gampola, the relic was housed in Niyamgampaya Vihara. It is reported in the messenger poems such as Hamsa, Gira, and Selalihini that the temple of tooth relic was situated within the city of Sri Jayawardenepura Kotte when the Kingdom of Kotte was established there. 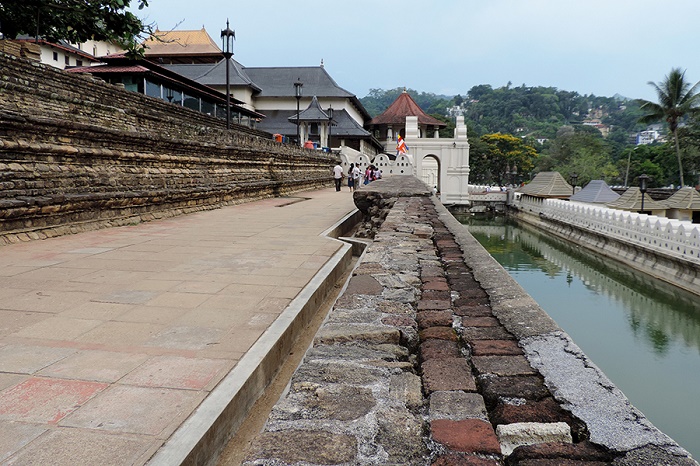 There were few attempts for the tooth relic to be stolen in modern times, one being in 1998 by the Tamil Tigers and the other one in 1989 by the Janatha Vimukthi Peramuna. Nevertheless, there is a brick wall which runs along the moat and Bogambara lake is known as water waves wall, where there are holes in it, so that the coconut oil lamps would be lit. 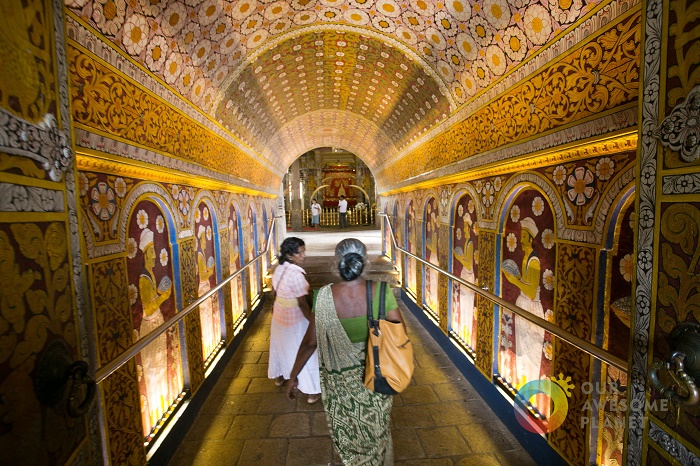 The main entrance gate called Mahawahalkada lies over the moat with depicted elephants in stone on each side, and at the foot of it there are steps with a moonstone, also known as Sandakada pahana, which is carved in Kandyan architectural style. Due to the major destruction by the 1998 attack, luckily the temple was rebuilt afterwards, and with the golden canopy that was built in 1987 over the main shrine and the golden fence which encircles the main shrine, there are other important features which can be also seen. 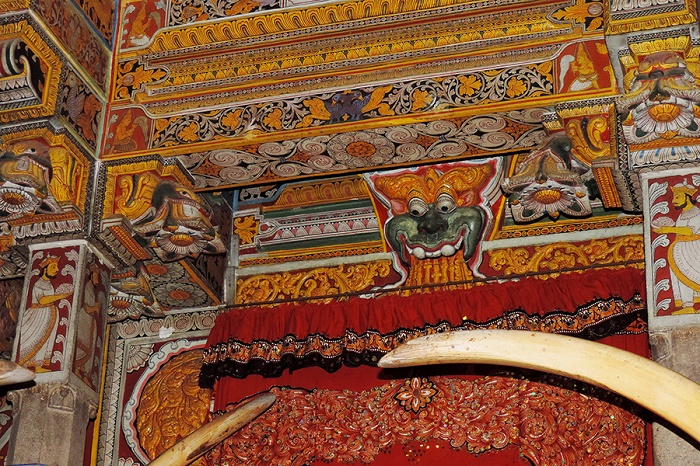 The tooth relic is encased in seven golden caskets which are engraved with precious gemstones, and they have the shape of a stupa, however, the previous procession casket which is still used during the Kandy Esala Perahera is also displayed in the same chamber. 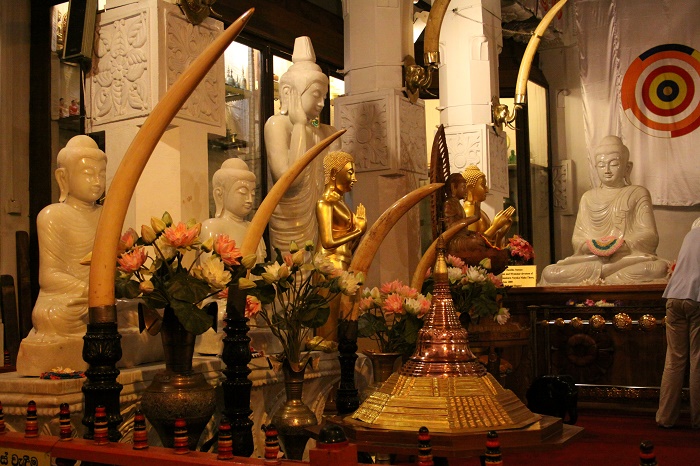 In addition, there is the Royal Palace of Kandy, situated to the north of the temple and it is also known as Maligawa, the audience hall or magul maduwa, which was the place where the Kandyan kings held their court, and the Mahamaluwa which is a great park terrace which is used for the general public to see the annual Esala perahera. 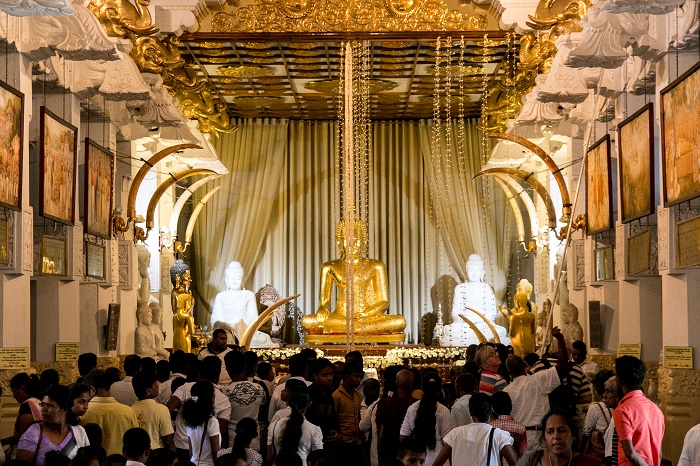 Nowadays, within the Mahamaluwa there are the statues of Madduma Bandara, Princess Hemamali and Prince Dantha, as well as the memorial that holds the skull of Keppetipola Disawe. As the original building of the temple complex was finished in 1595, nowadays, what one could see is something that is somewhat preserved, attracting all those visitors coming to the island nation, where they witness rituals that are performed three times per day. 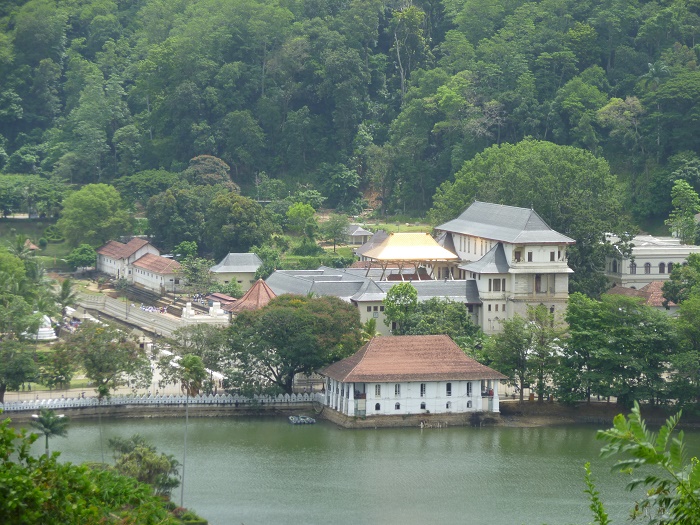 On Wednesdays there is even a symbolic bathing of the relic with an herbal preparation made from scented water and fragrant flowers called Nanumura Mangallaya, which holy water is believed to contain healing powers, which is why it is all the time distributed to those who are present to the event. A true historic piece of Sri Lanka, will make you simply live the country even more. 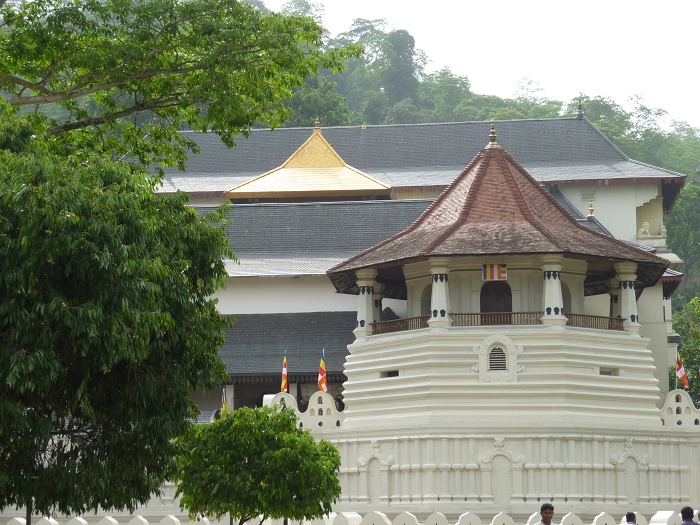