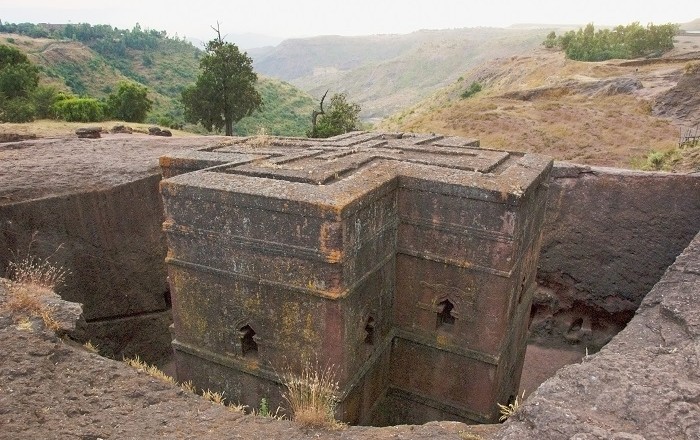 The Church of St. George is one of eleven monolithic churches in Lalibela, a city in the Amhara Region of Ethiopia. Originally named Roha or Warwar, this historical and religious site is currently accepted in the modern name of Lalibela, after King Gebre Mesqel Lalibela of Ethiopia, who is regarded as a saint by the Ethiopian Orthodox Tewahedo Church. 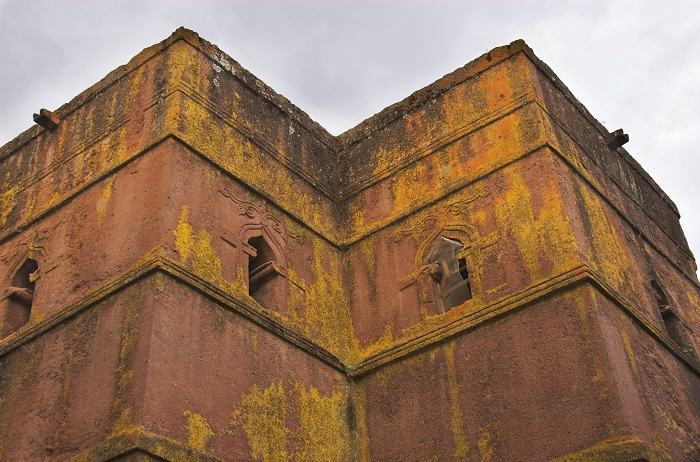 The church is located in a mountainous region in the heart of Ethiopia, some 645 km from Addis Ababa, and what is interesting about the church, it is carved out of rock. Its building is attributed to King Lalibela who set out to construct in the 12th century a New Jerusalem, after Muslim conquests halted Christian pilgrimages to the holy Land. Lalibela flourished after the decline of the Aksum Empire. 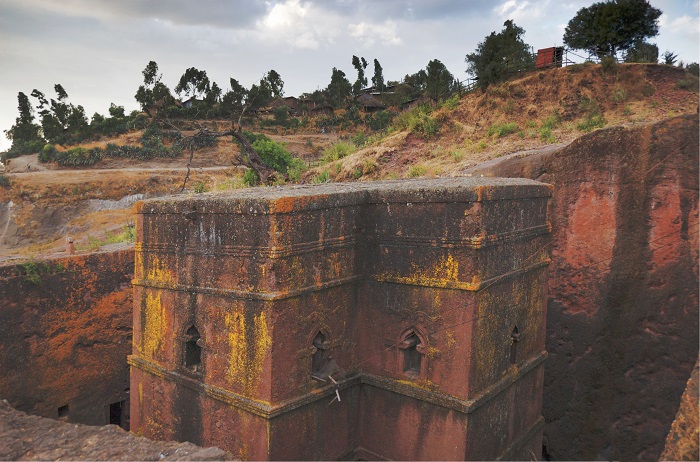 There are two versions of the church’s history: one says that the church was built after Lalibela’s death (c. 1220) by his widow as a memorial to the “saint-king.” The other claims it was a promise king Lalibela had made to St. George, who had been upset Lalibela had not constructed a church dedicated to him. 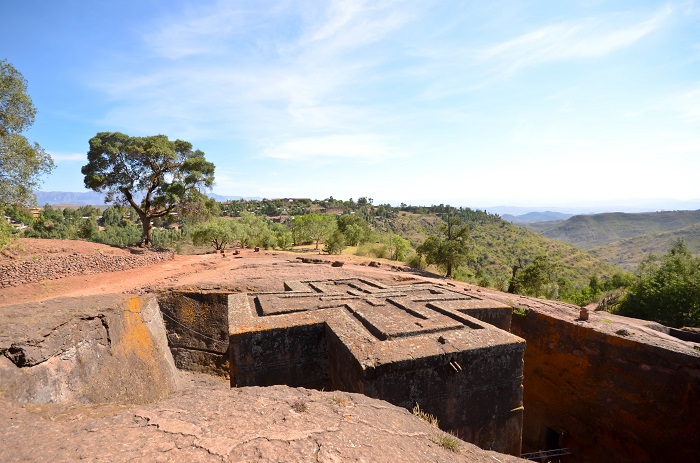 The church was carved from a type of limestone called tufa, the sole building material used in the structure. It has been dated to the late 12th or early 13th century AD, and thought to have been constructed during the reign of King Gebre Mesqel Lalibela, of the late Zagwe dynasty. It is among the best known and last built of the eleven churches in the Lalibela area, and has been referred to as the “Eighth Wonder of the World”. 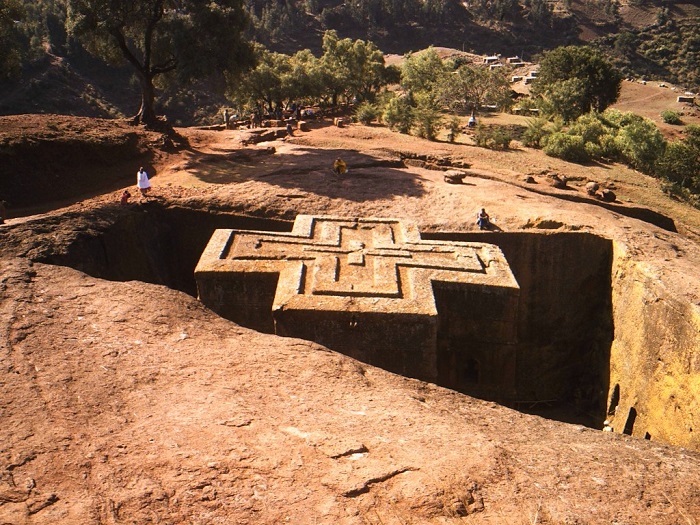 The church of St. George stands proud in a 25m by 25m wide pit that is carved out of solid volcanic rock. The construction of the church involved excavating a free-standing block of stone out of the bed-rock and then removing all the waste material from around it. 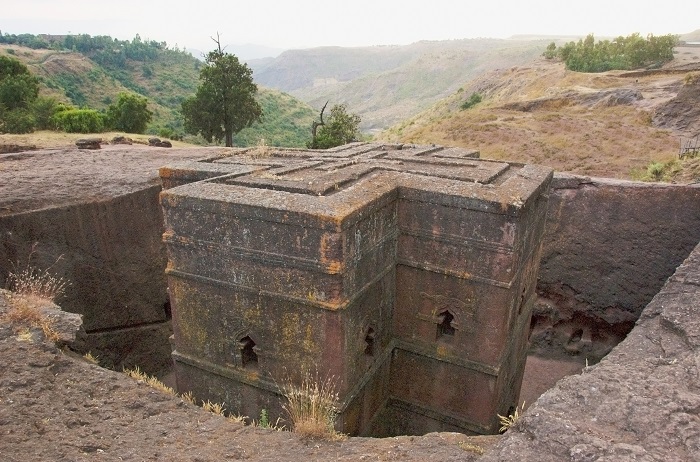 The stone masons then carefully chiseled away the church outline, shaping both the exterior and interior of the building as they went. They fashioned a simple yet exceptionally beautiful cruciform structure approximately 12 m high. 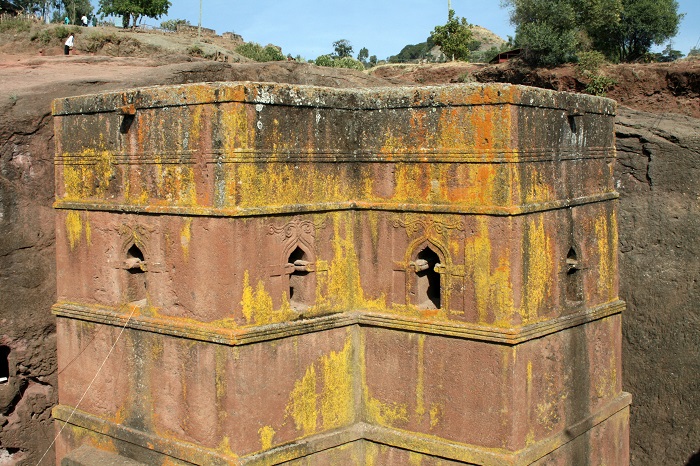 The church contains three west-facing doorways, nine ‘blind’ lower level windows and twelve upper-row windows. A number of the windows are embellished with carved semi-­palette cross motifs, while the roof of the structure contains a sequence of Greek crosses in relief, one inside the other. 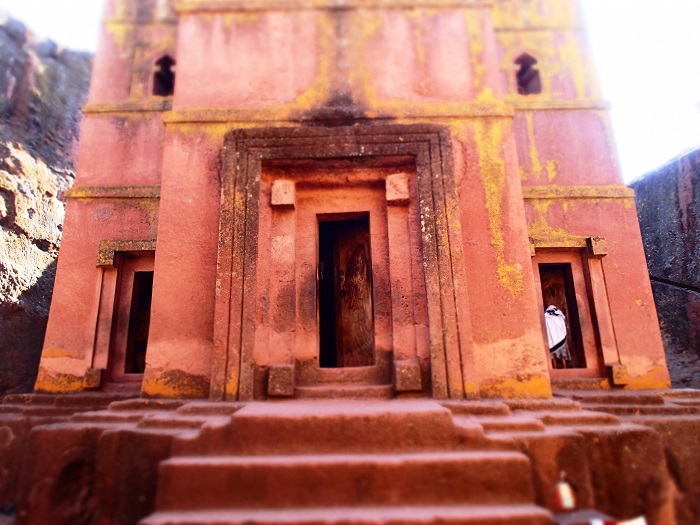 The church grounds are accessed via a descending trench and tunnel, which allow access to a sunken courtyard surrounding the building. This contains a small baptismal pool, while its vertical walls have a number of caves that are used as basic housing for priests and as burial tombs. 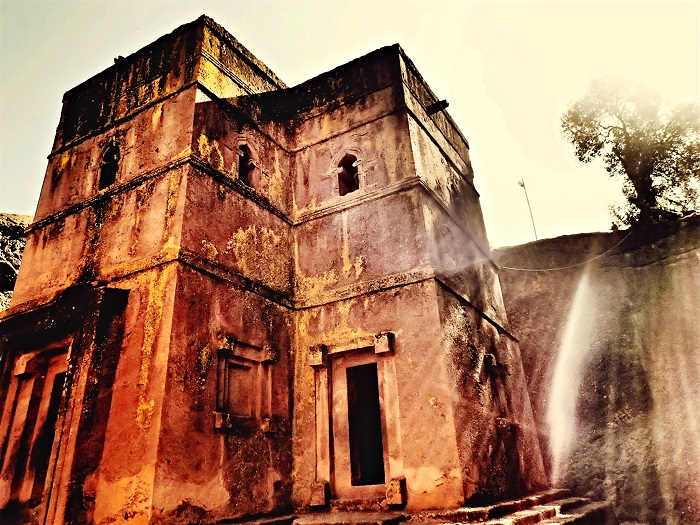