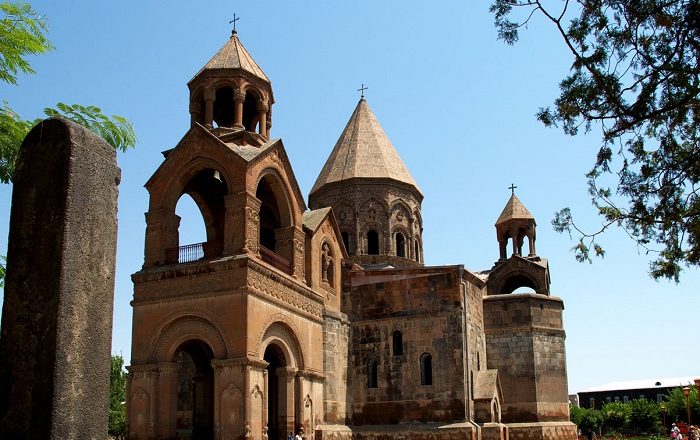 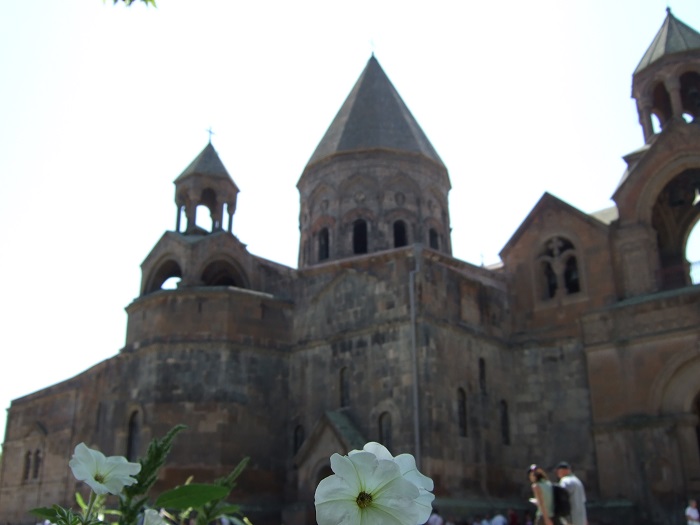 Built sometime in 301 AD, during the reigning of the Kingdom of Armenia, it has a total length of 33 meters (108 feet), and total width of 30 meters (98 feet). As there is no official source about the height of the cathedral, it is considered to be over 27 meters (89 feet), and it was built in a traditional Armenian style of church architecture by King Tiridates III when Armenia officially adopted the Christianity as a state religion. 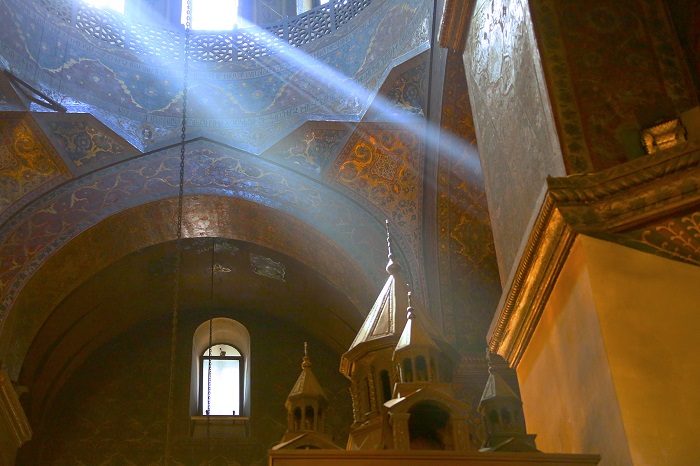 At first, it replaced a preexisting temple, which was seen as a good sign to conversion to Christianity, and from what we can see today, the core of the structure, was built in 483 and 484 by the great Armenian nobleman, Vahan Mamikonian. During the many centuries, the cathedral has seen good and bad times, where it suffered more from neglect and damages during the invasions of the former ancient neighbors. 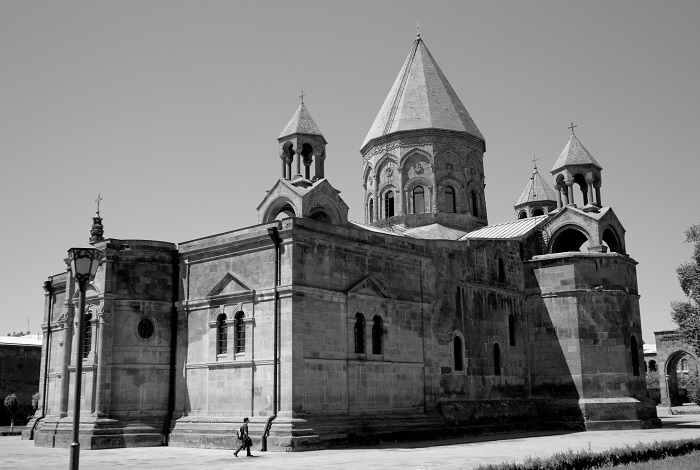 As the capital of Armenia moved from one to another city, it was the Romans who moved the capital from Artashet to Vagharshapat, and the importance of the cathedral grew even bigger. Soon after that, the Persians invaded the area and severely damaged the cathedral. 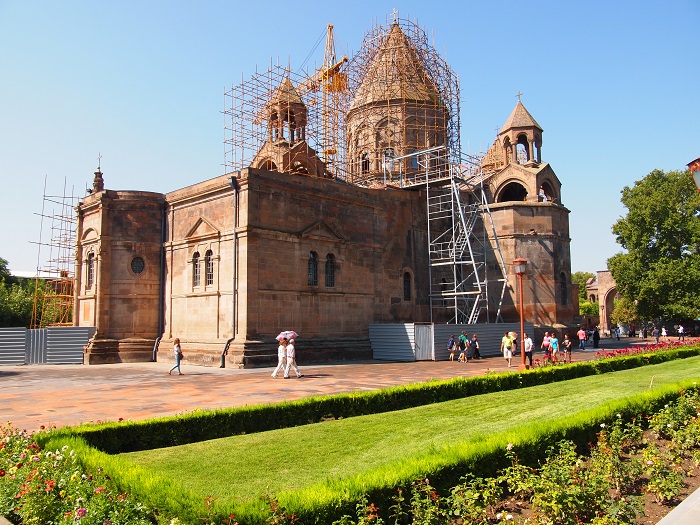 Nevertheless, even in a desperate condition, the cathedral did not lose its significance and the first official restoration occurred in 1441 when it became the official administrative headquarters of the governing body of the Armenian Apostolic Church, better known as the Mother See of Holy Etchmiadzin. 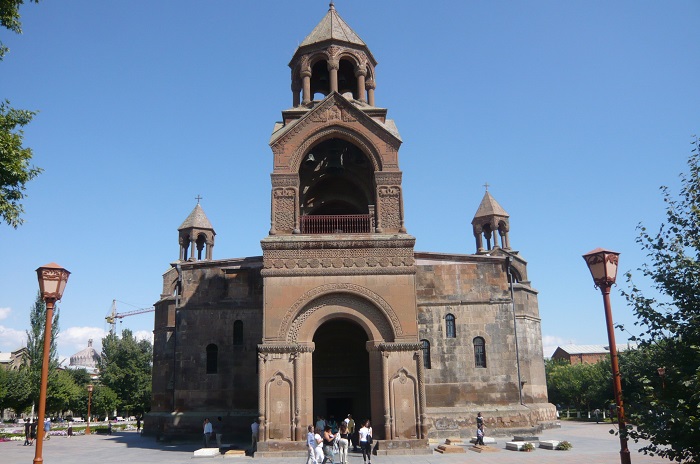 Unfortunately, the Etchmiadzin Cathedral was once again plundered in 1604 by the Safavids, when relics and stones were taken out of the cathedral to New Julfa in Iran, with hope and also effort to undermine the Armenians’ attachment to their homeland. Yet again, there were certain renovation throughout the centuries, and in the late 17 century belfries were added to the structure in order to get a better picture as a whole Christian temple. 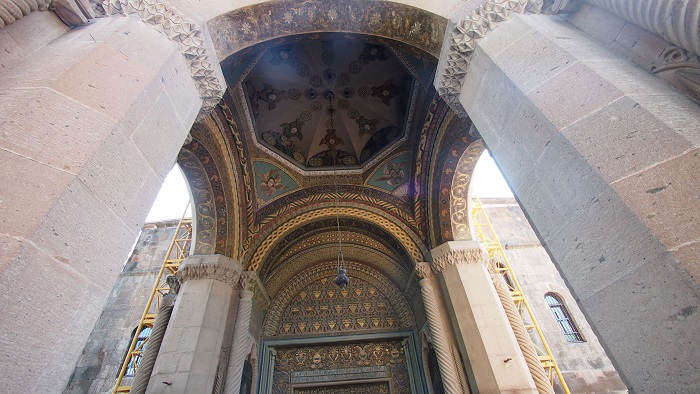 Still, today what can be visible is the different architectural styles which were applied with every renovation, however, the structure successfully retained its traditional Armenian church architecture. The exterior has been always described like an austere, ascetic, not ostentatious, like a massive cube surmounted by a faceted cone on a simple cylinder. 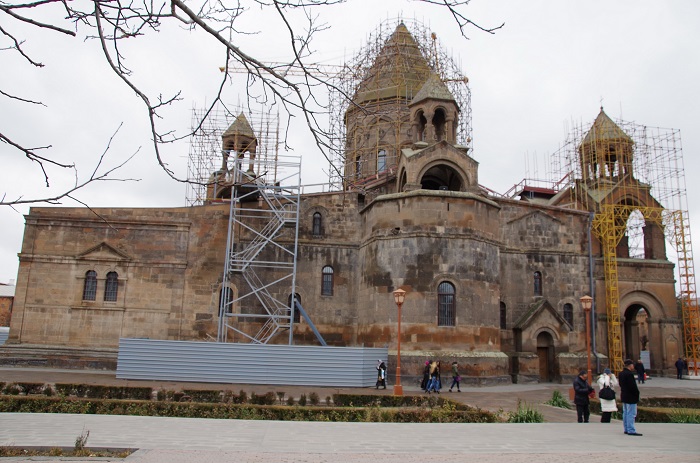 What everyone can see is a cruciform plan with a central cupola, four free-standing piers, and four projecting apses which are semicircular on the interior and polygonal on the exterior. The central piers, cruciform in section, divide the interior space into nine equal square compartments. 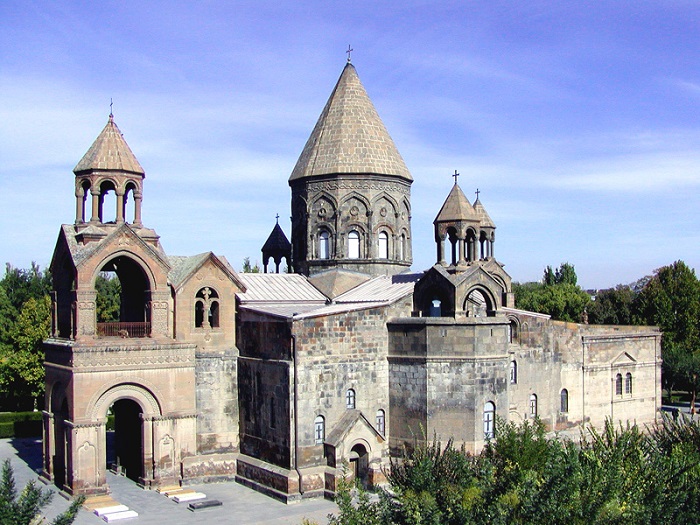 One of the most impressive reliefs on the exterior is the relief of the Gregory the Illuminator, the patron saint and first official head of the Armenian Apostolic Church, which can be found on the western’s belfry. 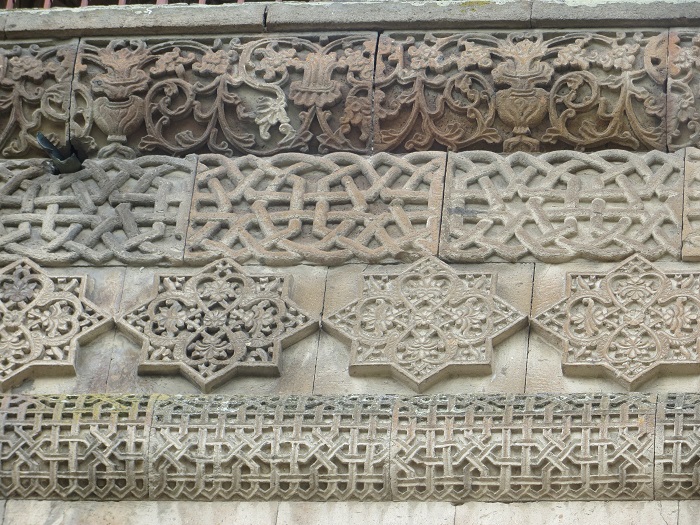 Nevertheless, following Stalin’s death, the cathedral became more and more revived under the rule of the Catholicos Vasken I, as there were excavations carried out throughout the 1950s, and a major renovation was done in the same period, with the help of the Armenian diaspora. 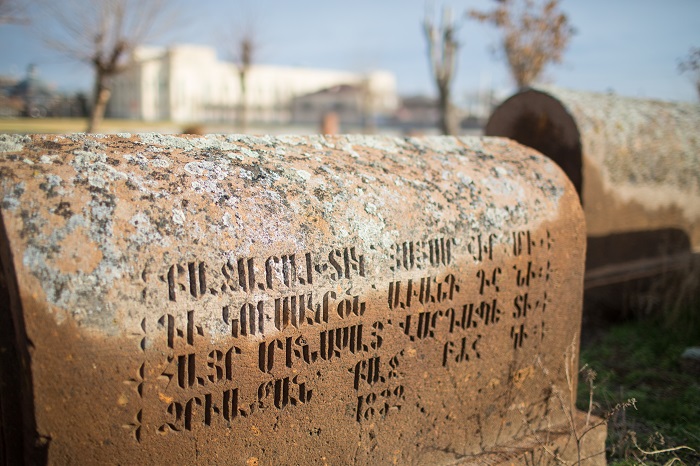 Nowadays, the Etchmiadzin Cathedral is one of the greatest treasures, not just for Armenia, but also for the world, which is why it is protected by UNESCO, and since 2000 it has been added to the UNESCO World Heritage list. A true, spiritual gift from the Armenian people to the entire world! 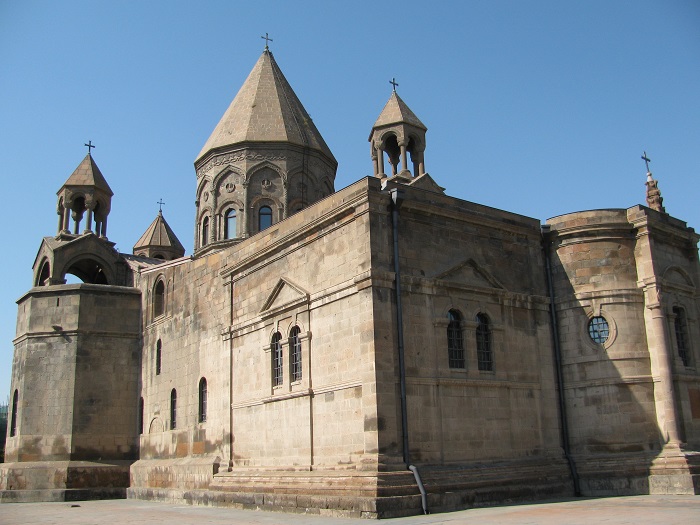 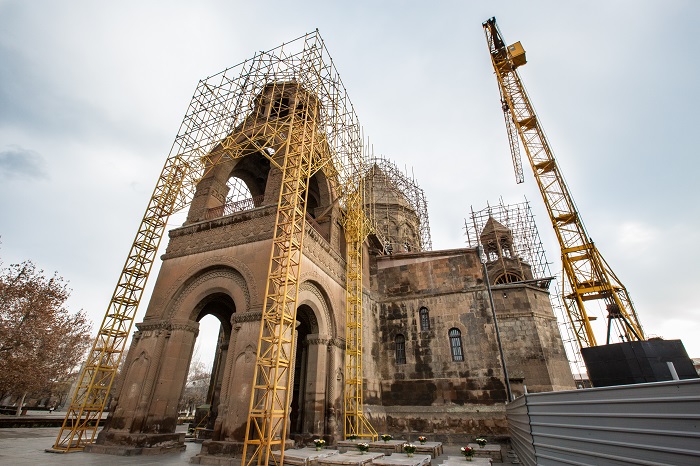 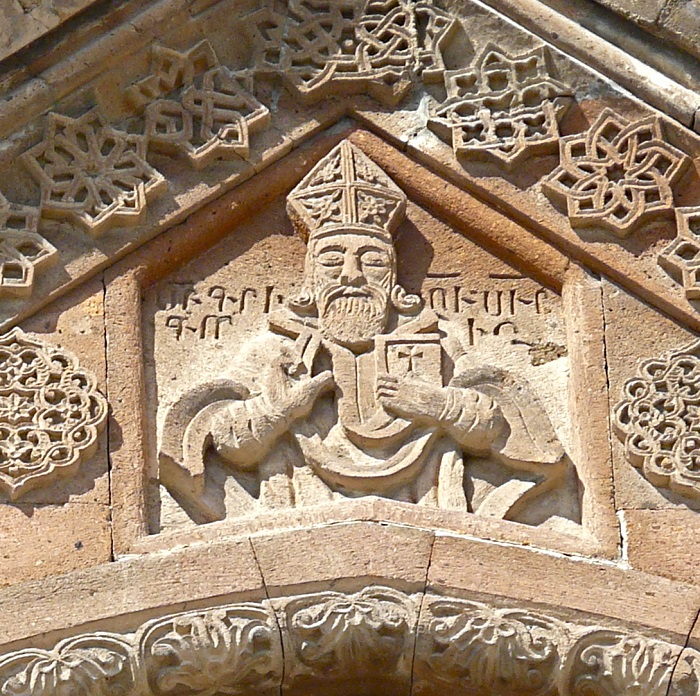 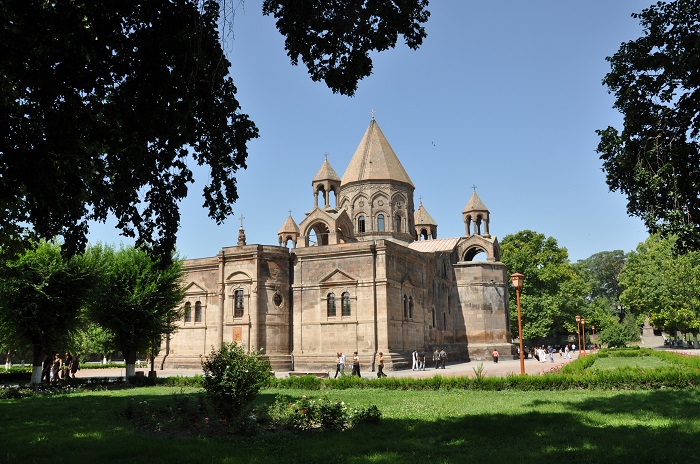 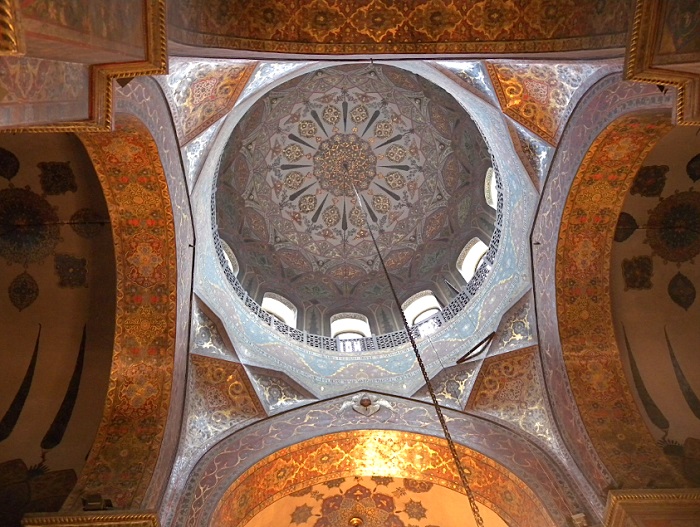 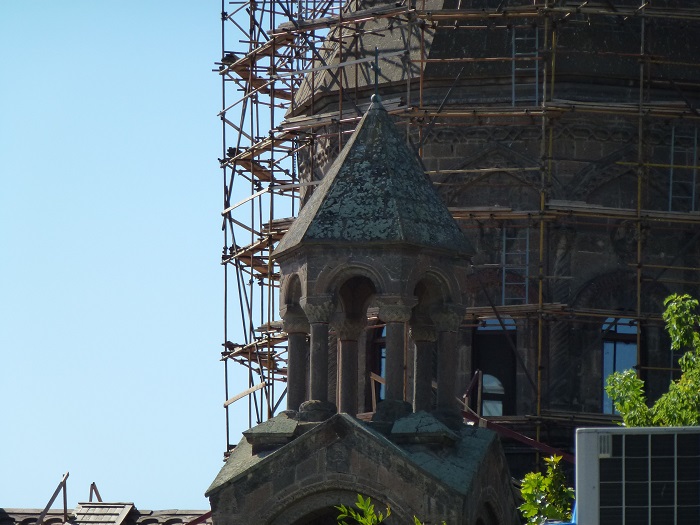 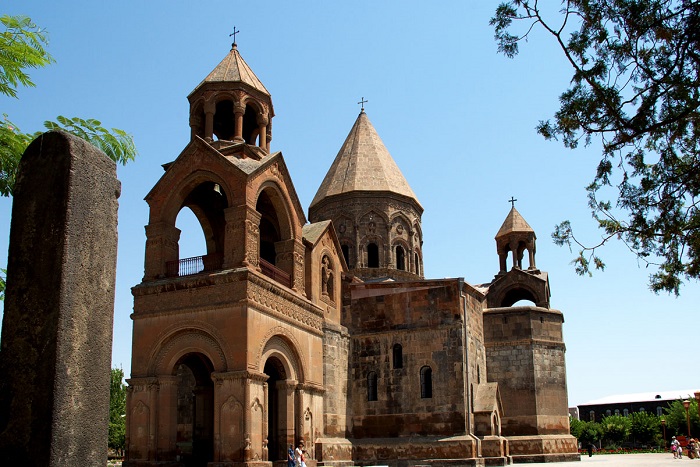 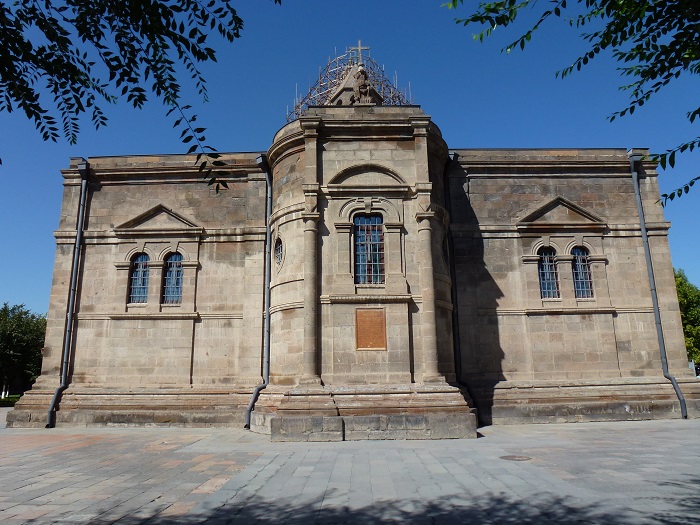