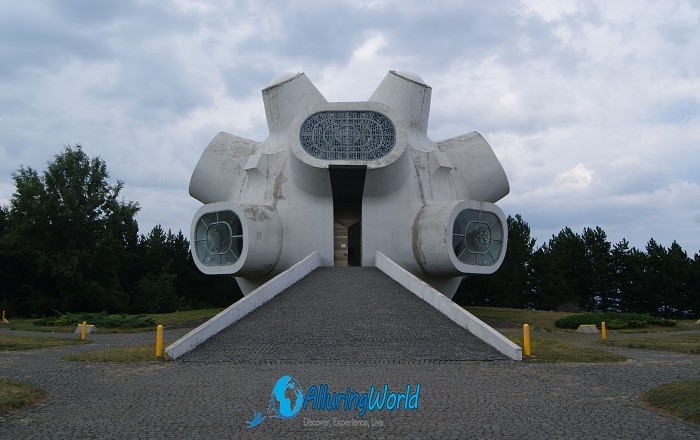 Makedonium, which is also known as Ilinden Memorial, is a famous landmark from the city of Krushevo which is located in the southern part in the Republic of Macedonia. The monument represents most commonly the Ilinden uprising. 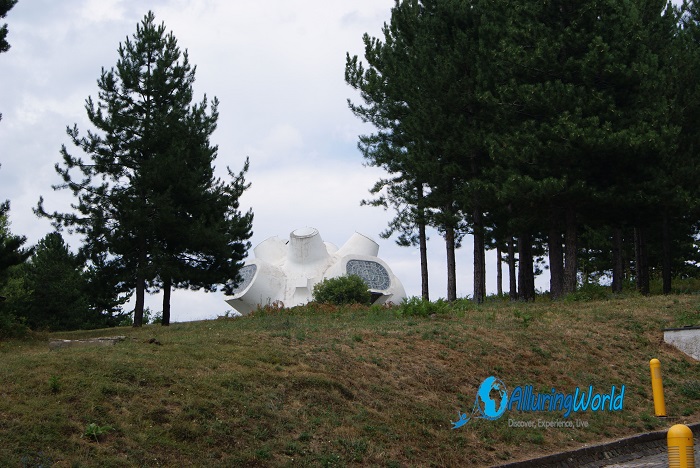 The uprising in the modern Macedonian history happened in 1903, when a group of brave Macedonians charged into battle against the mighty army of the Ottoman Empire, and sparked the movement of creating free Macedonia. 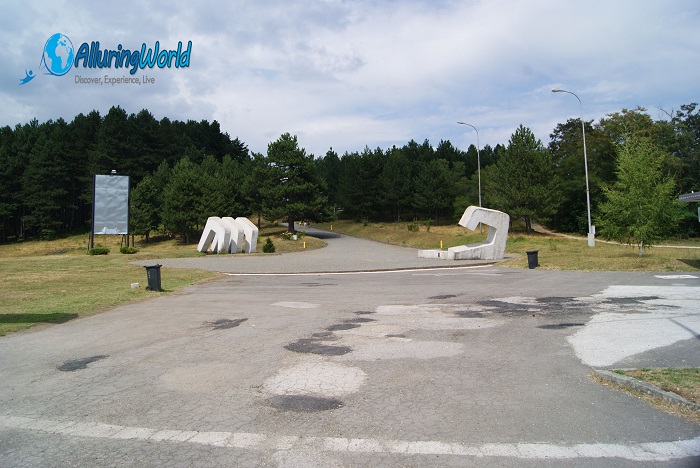 The Memorial is officially opened on 2 August 1974, the 30th anniversary of the Second Session of the Anti-fascist Assembly for the National Liberation of Macedonia and the 71st anniversary of Ilinden uprising.  Also, it is interesting to be noted that at the time when it was built, the monument follows the creative architectural style at the time in Yugoslavia, when at that time many monuments were built in the same architectural style. 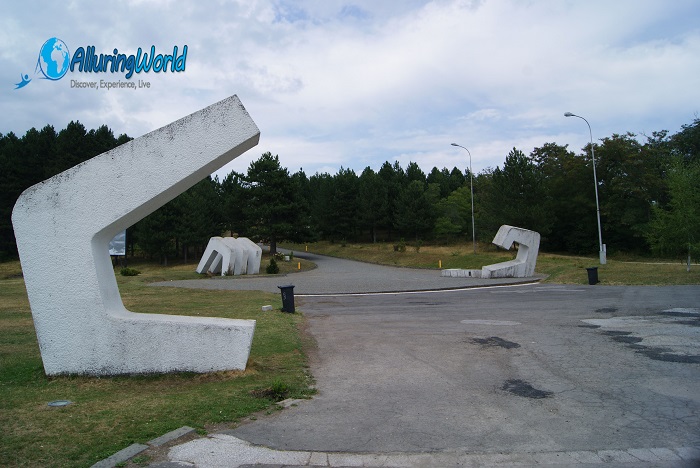 The artists that created this alluring memorial are Jordan Grabuloski and Iskra Grabuloska. The memorial is divided into a couple of segments which have some kind of meaning or symbolism.  The first segment where it begins shows the torn chains in three different places. These chains represent the oppression the Macedonian people have witnessed throughout the centuries from the Ottomans (500 years more precisely) and most likely they are placed in three places because at that time Macedonia as part of the Ottoman Empire was planned to be divided between its neighbors in three different parts. 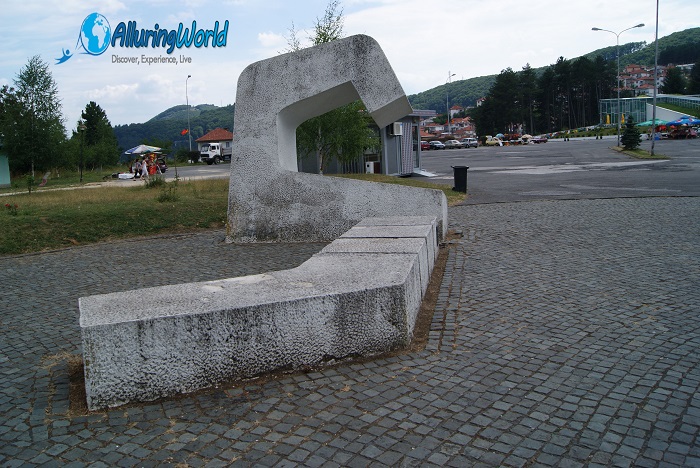 Even though there are no official statements from the architects, the Macedonian people will be happy to explain the history behind this. Nevertheless, most importantly, they stand for Macedonia’s liberation from foreign rule.  Then the memorial continues up the hill through small path with the Crypt which has “canon-like” metal plaques on which are written the names of the important battles and most important heroes , from the period before and after the period when the Ilinden Uprising happened. 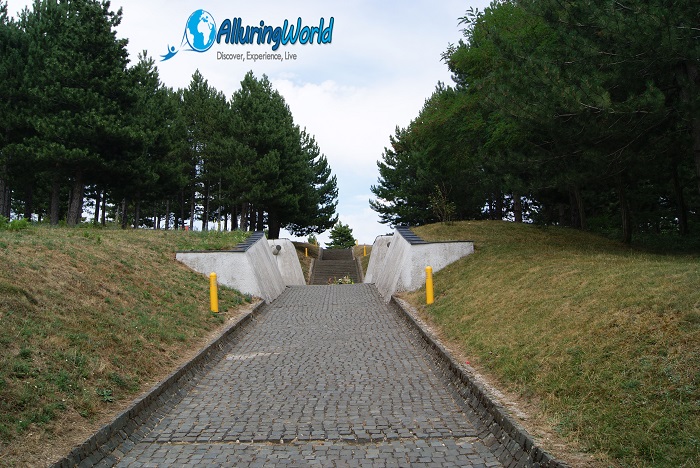 As they are encircled, each of them holds different story for itself, each battle that was one of the bloodiest or the most important for the struggle against the Ottoman Empire that year, or simply heroes that done something great for their motherland. 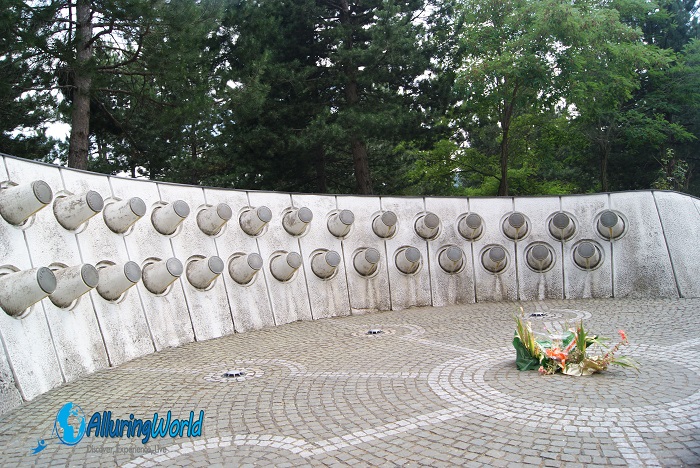 Serving as a coded library of stories, there are 58 plaques that try to show the most important events making every visitor to be curious enough to search for the story from the local people, someone who understands the history, or perhaps searching online. 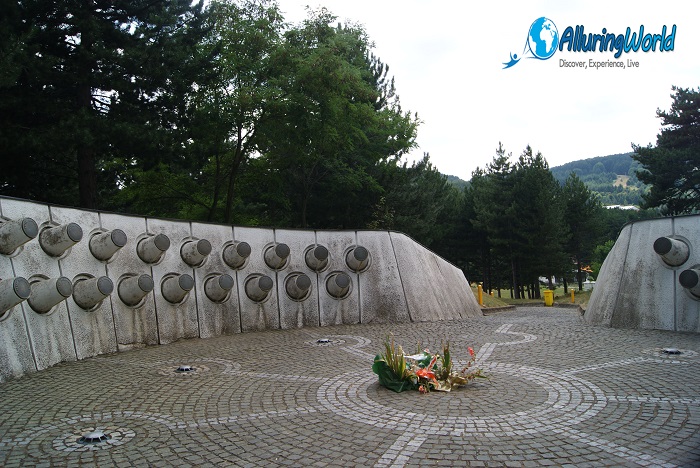 The path then continues towards the next segment which is the place from where the main piece of the memorial can be seen better. First, when getting to the next level of the memorial, the visitors can see a place which is most commonly known as the Amphitheater, that features picturesque mosaic scenes all around the ground. 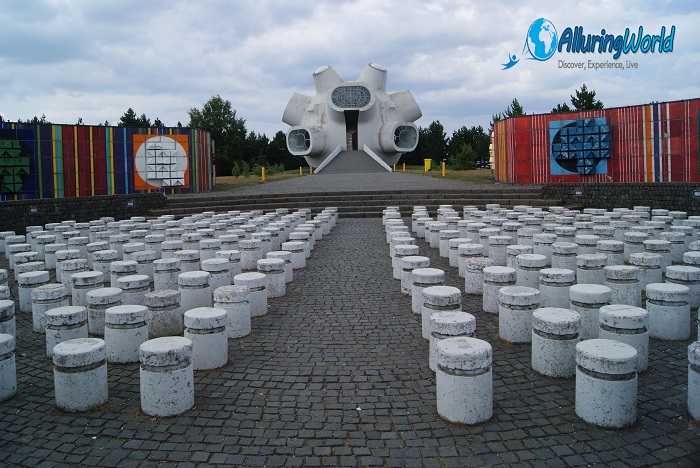 As the mosaics form peculiar geometric shapes, people can gather around in the Amphitheater  and hear poetic readings, lectures, presentations, exhibitions etc. The final piece of the memorial, which is quite amazing, is also the centerpiece of this magnificent monument. 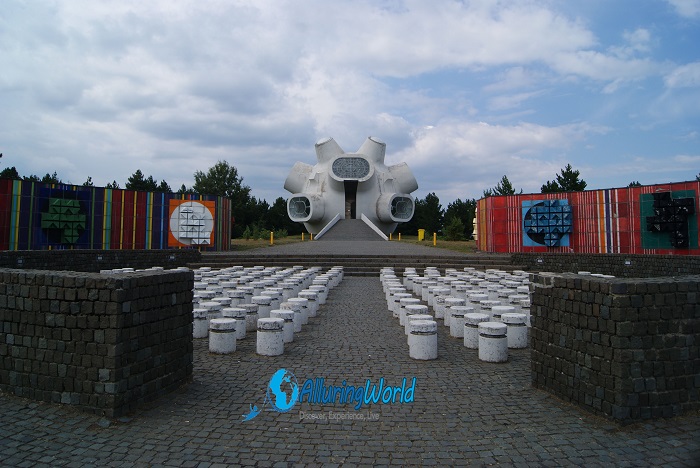 It is the Dome, which has the shape of the weapon Mace, since in Ottoman times, the mace was commonly used, and also it is some sort symbol for resistance. 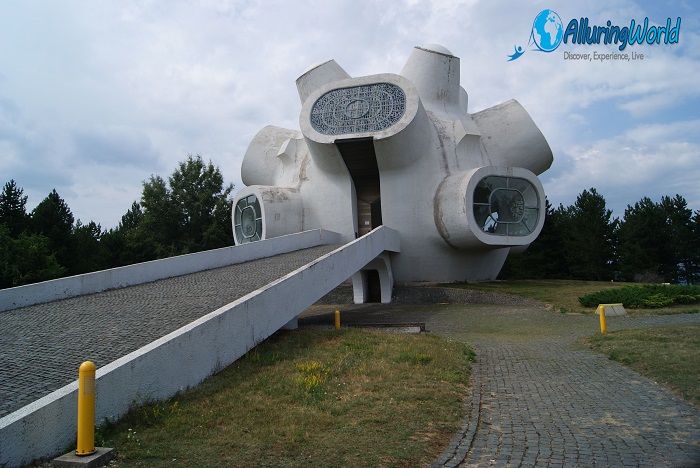 The Dome is approached from a raised walkway which takes you right to the tall entrance door. The entrance door is in the shape of the letter M, standing, of course, for Macedonia. 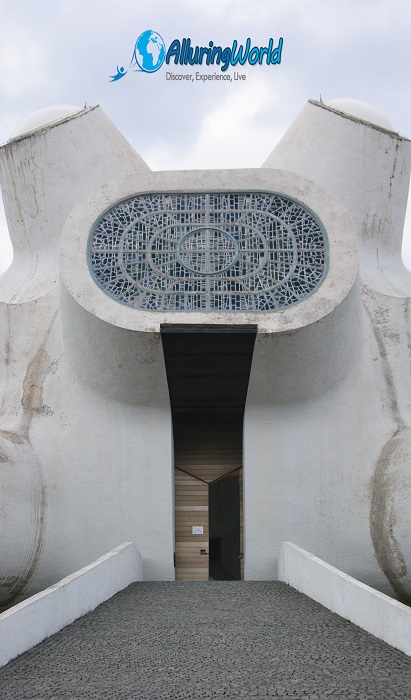 Nonetheless, once you enter inside, from there you can clearly see four horizontal nodules branching out from the sphere, each ending in a glass observation window. There are abstract mosaics on the walls on each of the four observation windows, that have some kind of symbolism for the struggle against the Ottoman Empire. 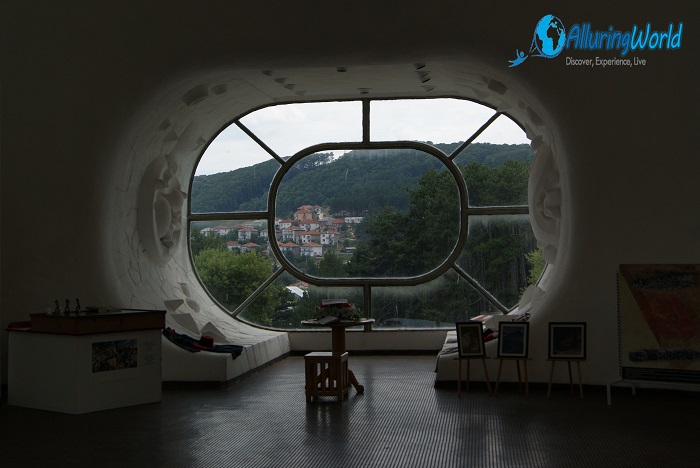 Above those, another set of four window-like openings are aligned with the spaces in between, and fitted with different and unique coloured glass. Then, higher still, another four lumps are raised up towards the heavens. 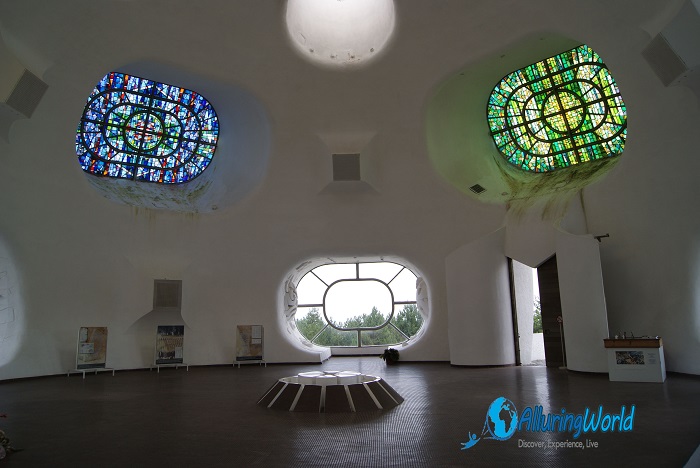 The inside also is minimalist, with a symbolic eternal flame raised from the floor that is lightning the interior of the monument, forming, of course, the Macedonian flag. 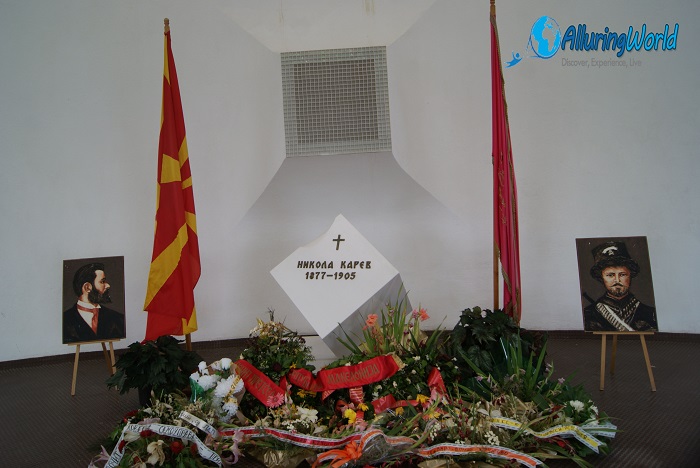 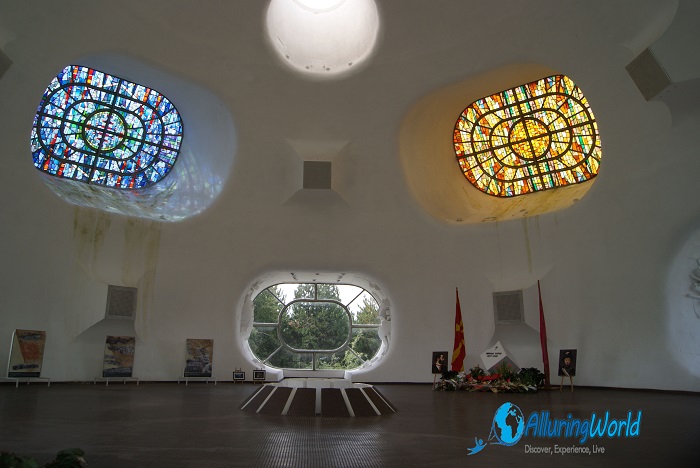 Even though, his dreams of Macedonia are not as he wanted, nor planned, yet, today Macedonia is an independent Republic which enjoys the opportunities an independent country can have. Nowadays, this memorial is one of the most known, and also most visited ones in the country. 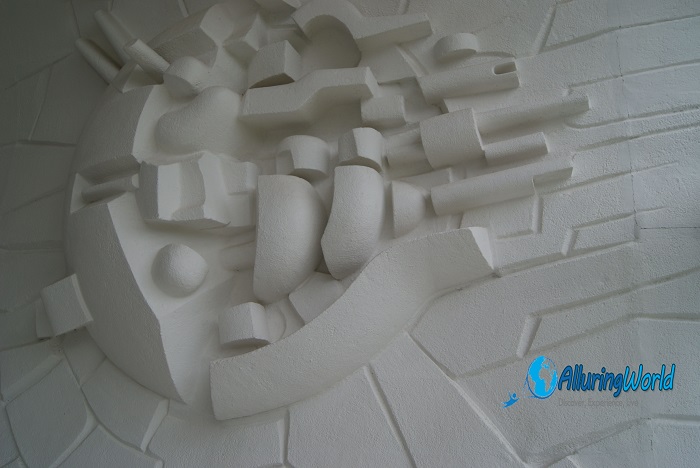 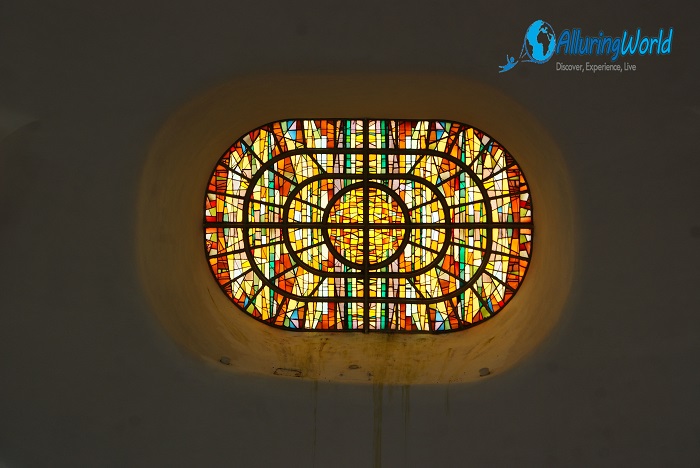 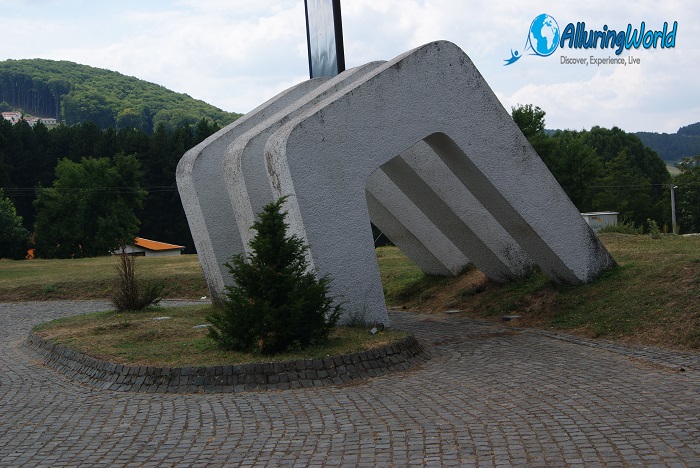 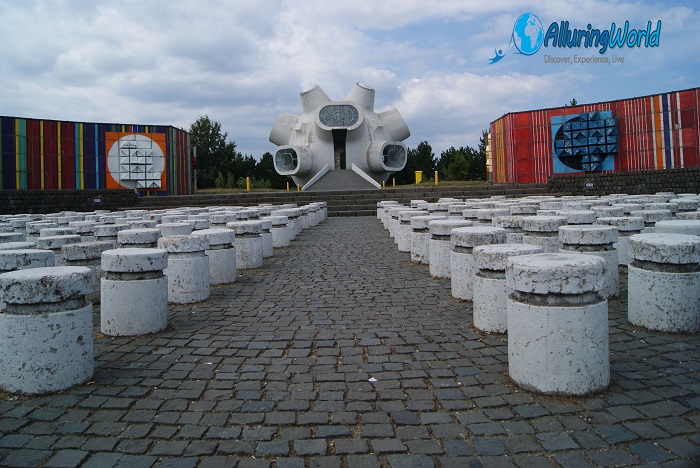