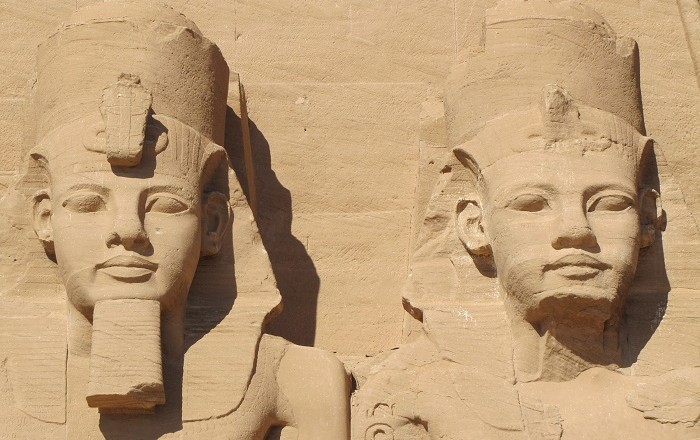 Abu Simbel is a temple complex, originally cut into a solid rock cliff, in southern Egypt (near the border with Sudan) and located at the second cataract of the Nile River. 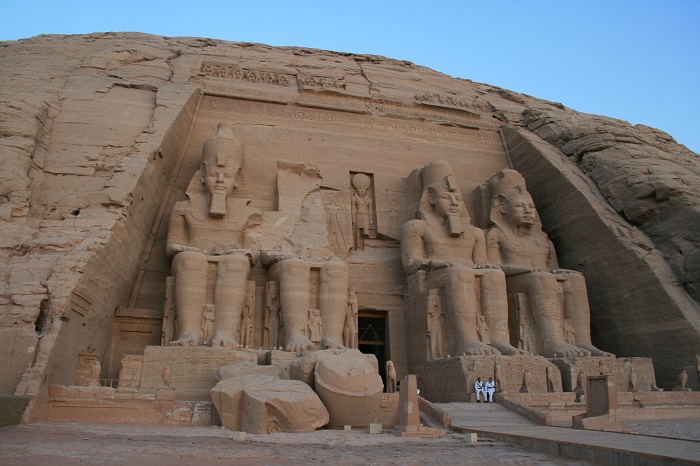 More precisely, built on the west bank of the Nile River, between the first and second cataracts of the Nile, the site of Abu Simbel is one of the most recognizable ancient sites in Egypt. The sacred area, marked out as a forecourt and bounded on the north and south sides by brick walls, occupied a place between the sandstone cliffs and the river. 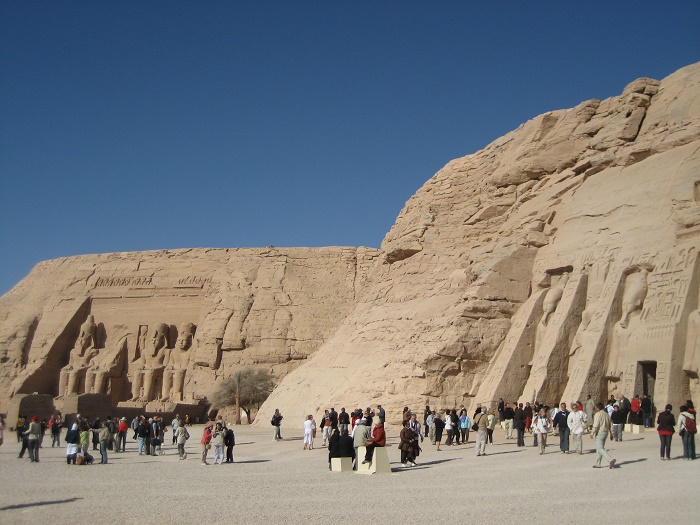 Construction of the temple complex started in approximately 1264 BC and lasted for about 20 years, until 1244 BC. Known as the “Temple of Ramesses, beloved by Amun” it was one of six rock temples erected in Nubia during the long reign of Ramesses II. Their purpose was to impress Egypt’s southern neighbors, and also to reinforce the status of Egyptian religion in the region. Historians say that the design of Abu Simbel expresses a measure of ego and pride in Ramesses II. The temple was cut into the face of the cliff, before which is a rock-cut terrace. The temple is approached across this terrace up a flight of steps with an inclined plane in the middle, and enclosed on either side by a balustrade behind which stood a row of hawks and statues of Ramses in various forms. 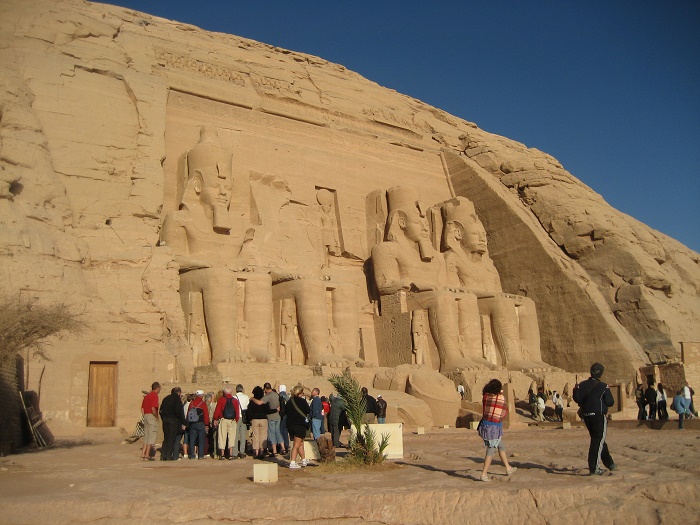 The two temples which comprise the site (The Great Temple and The Small Temple) were created during the reign of Ramesses II (c. 1279 – c. 1213 BC) either between 1264 – 1244 BC or 1244-1224 BC and the construction lasted for about 20 years. The discrepancy in the dates is due to differing interpretations of the life of Ramesses II by modern day scholars. 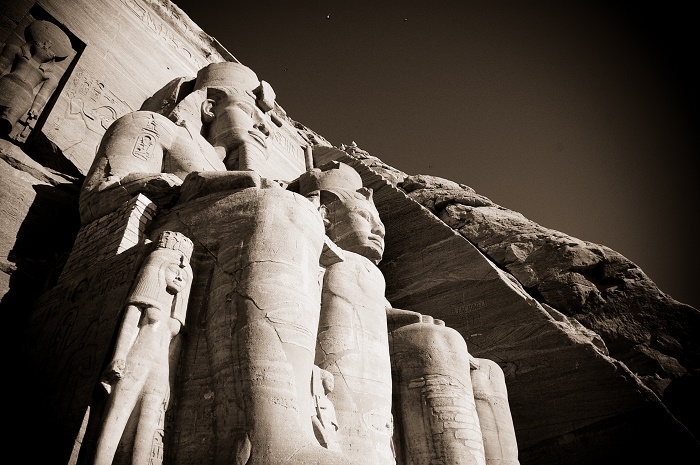 It is certain, based upon the extensive art work throughout the interior of the Great Temple, that the structures were created, at least in part, to celebrate Ramesses’ victory over the Hittites at the Battle of Kadesh in 1274 BC. To some scholars, this indicates a probable date of 1264 BC for the initial construction as the victory would have been fresh in the memory of the people. 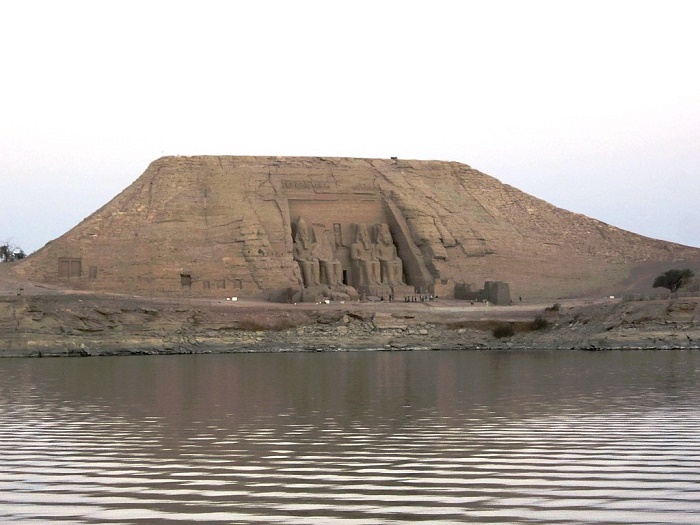 However, the decision to build the grand monument at that precise location, on the border with the conquered lands of Nubia, suggests to other scholars the later date of 1244 BC in that it would have had to have been begun after the Nubian Campaigns Ramesses II undertook with his sons and was built as a symbol of Egypt’s power. 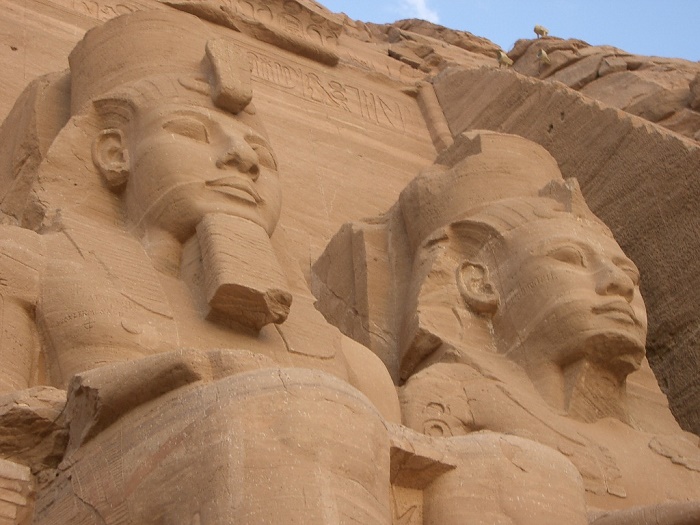 The larger of the two temples contains four colossal statues of a seated Ramesses II at its entrance, each about 69 feet (21 meters) tall. The entrance-way to the temple was built in such a way that on two days of the year, October 22 and February 22, the light would shine into the inner sanctuary and light up three statues seated on a bench, including one of the pharaoh. It’s been hypothesized that these dates may celebrate his coronation and birth.

With the passage of time, the temples fell into disuse and eventually became covered by sand. Already in the 6th century BC, the sand covered the statues of the main temple up to their knees. The temple was forgotten until 1813, when Swiss orientalist Jean-Louis Burckhardt found the top frieze of the main temple. Burckhardt talked about his discovery with Italian explorer Giovanni Belzoni, who traveled to the site, but was unable to dig out an entry to the temple. 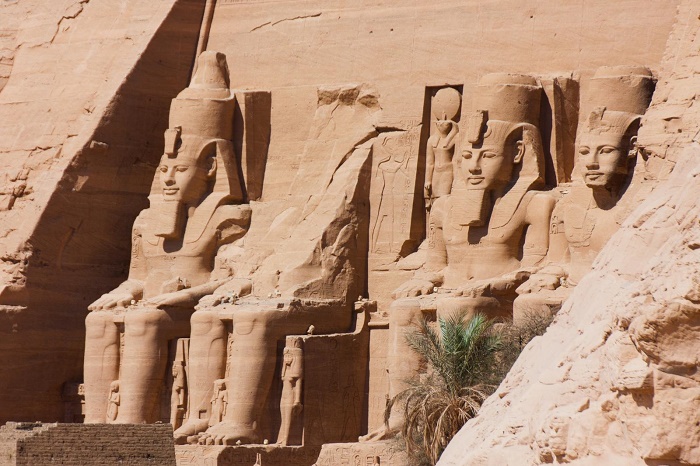 Belzoni returned in 1817, this time succeeding in his attempt to enter the complex. A detailed early description of the temples, together with contemporaneous line drawings, can be found in Edward William Lane’s Description of Egypt (1825-1828). 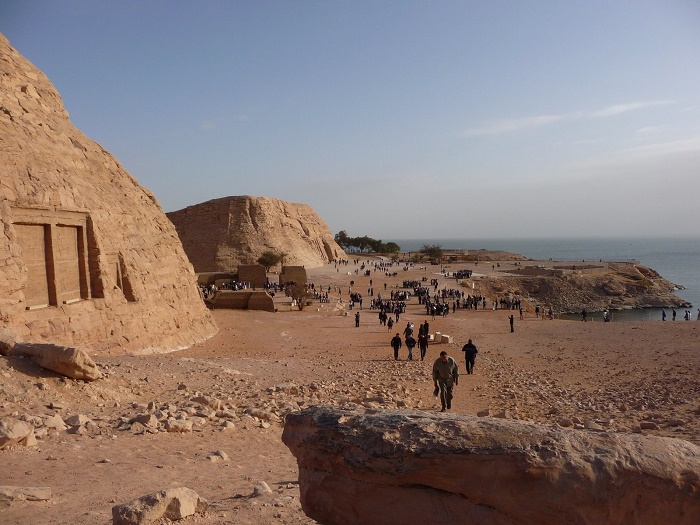 However, the Egyptian government planned to build the Aswan High Dam on the Nile which would have submerged both temples. Between 1964 and 1968 CE, a massive undertaking was carried out in which both temples were dismantled and moved 65 metres (213 feet) up onto the plateau of the cliffs they once sat below and re-built 210 metres (690 feet) to the north-west of their original location. The salvage of the Abu Simbel temples began by a multinational team of archaeologists, engineers and skilled heavy equipment operators working together under the UNESCO banner. It cost some $40 million at the time. Today, a few hundred tourists visit the temples daily. Guarded convoys of buses and cars depart twice a day from Aswan, the nearest city. Many visitors also arrive by plane, at an airfield that was specially constructed for the temple complex. 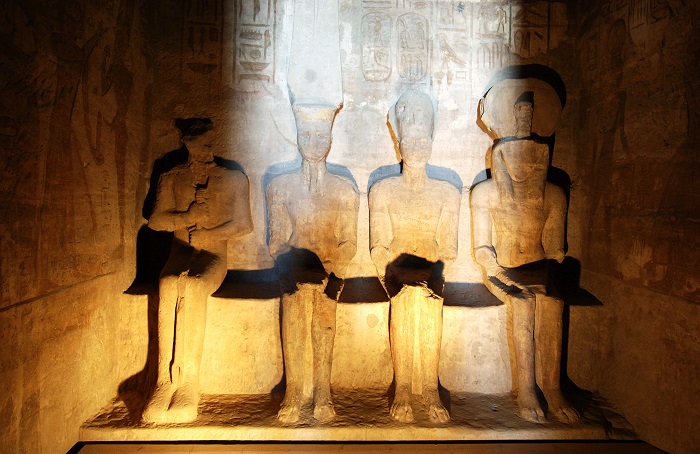